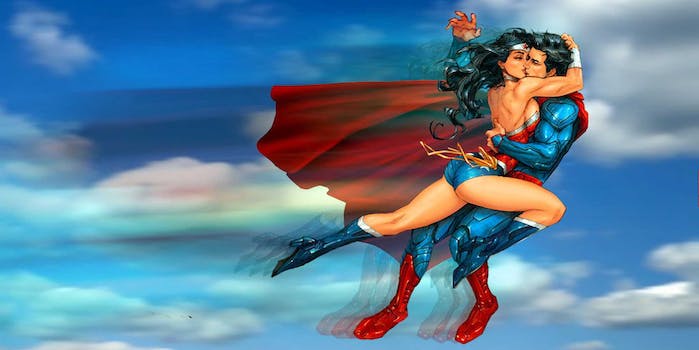 Has DC Done Something Stupid Today answers the question every fan wants to know but doesn't want to ask.

To mainstream audiences, DC Comics is the company behind mega-blockbusters like Man of Steel and the Dark Knight trilogy. But to many longtime fans, DC Comics has developed a decidedly rocky reputation.

For decades, DC vs. Marvel has been the biggest rivalry in the industry, with recent film and book releases highlighting a particular stereotype: that DC caters to straight, white men, while Marvel attempts to be more inclusive. Recent highlights include DC firing award-winning Batgirl writer Gail Simone for commenting about sexism in the industry, hiring notorious homophobe Orson Scott Card to write a Superman book, and attempting to appeal to women by modeling a Superman/Wonder Woman title on Twilight and showing more of Superman’s butt.

There’s no denying that DC comics are still massively successful, but many fans are starting to get tired of the constant stream of weirdly racist/sexist/offensive story details and foot-in-mouth publicity announcements. Which brings us to Has DC Done Something Stupid Today.

The site works like a workplace accident timer, giving up-to-date news on how long it’s been since DC Comics screwed something up in public. As it says on the site’s front page:

“Are you tired of having to comb through dozens of articles trying to figure out if DC Comics has done something cringeworthy today? Would you like to be the first person to know how long it’s been since DC’s alienated fans, minorities or people with discerning taste?”

Not the most positive outlook, but it’s probably helpful for DC lovers and haters alike. The counter is currently at seven days, with the last couple of DC mishaps including the whole Superman/Twilight thing, and a comic where “Teela, warrior goddess and captain of Prince Adam’s Royal Guard, inexplicably strips down and is immediately struck by a flaming wardrobe.”

Much like the Marvel-inspired Hawkeye Initiative, which pokes fun at the unrealistically “sexy” poses in female superhero art, Has DC Done Something Stupid Today isn’t actually aiming to give DC Comics a bad reputation. It’s just fannish criticism, and aside from serious schadenfreude junkies, most readers will be hoping that the counter makes it into double digits at least. Although right now, that doesn’t seem particularly likely.