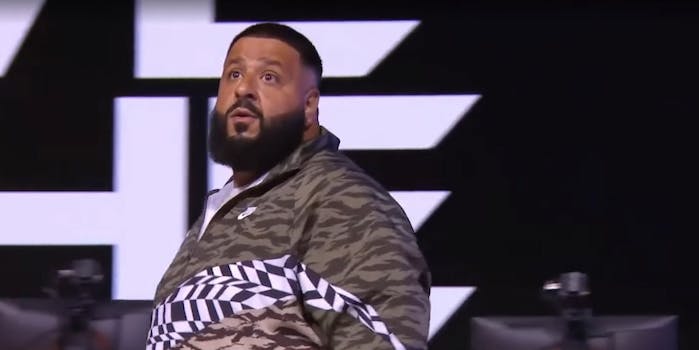 DJ Khaled performed at the Overwatch championship, and it was … awkward

If you’re a little confused why DJ Khaled appeared onstage at Overwatch League, you’re certainly not alone. And the artist behind the “congratulations, you played yourself” meme got played himself at the Overwatch League Grand Finals this weekend—and the awkwardness was deafening.

The Overwatch League Grand Finals, where the popular video game’s top esports contenders dualed for the championship title, were just getting underway when DJ Khaled appeared. Khaled, known for his work as a record producer and as the guy who shimmies around in music videos with Justin Bieber, was quick to play the role of hype man, and it seemed to work for a minute with a few shots of crowd members gyrating along.

That quickly changed, however, as Khaled made frequent stops to let the crowd sing along. The only problem was that apparently nobody knew the words to his songs.

In the video below, you can see Khaled shouting “nothing can,” pausing to let the crowd fill the rest of the verse, except he’s met with deafening silence. Khaled then goes on to describe how he’s currently on tour with Jay-Z and Beyonce but that he felt it was important to be there at the Overwatch League Grand Finals before he jumps back on a jet. He manages to get the crowd back to waving their arms, but at the 3:06 mark, he shouts “New York, sing it,” and is met with deafening silence.

Most artists might try to wrap things up there, but not DJ Khaled. A few minutes later, he manages to get the audience chanting his name (a common staple in his performances), but again commands the audience to sing and is yet again met with deafening silence.

I was worried about playing my solo set live but now that I’ve seen DJ Khaled perform for thousands of confused disinterested gamers who didn’t know any of the songs that he was begging them to sing along to, I’m like, well at least I’ll never play a gig this rough

dj khaled is performing for the overwatch league finals and i feel that i missed a golden opportunity to make a sign that says “oral sex is good, actually”

So is DJ Khaled the next Overwatch hero?

The rest of the performance is a grab bag of DJ medleys and some additional vocals, but by then it seems like it’s too late. I won’t pretend to know what the overall Overwatch community enjoys listening to, but for a sizeable portion, it seems like DJ Khaled isn’t the top choice. To his credit, Khaled acted like a professional and finished the whole 15-minute performance, but overall it was a dodgy affair.

I do have to wonder, though, if DJ Khaled was truthful about it being important to perform at the Overwatch League Grand Finals, I wonder which hero he mains. Let’s hope it’s Lucio.