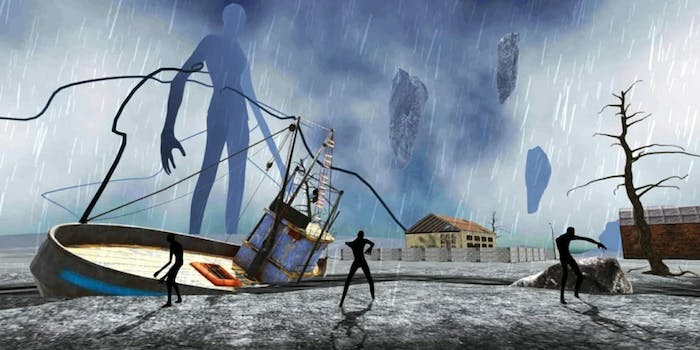 'Genius Kojumbo has outdone himself again.'

Death Stranding might be the most hotly anticipated game in the world, a mystery wrapped in an enigma starring beloved actors like Norman Reedus and Mads Mikkelsen. But while we’ve seen several intriguing trailers since 2016, Death Stranding doesn’t actually have a release date yet—and that leaves a tempting niche for knock-offs like the newly released Deadly Standing.

You can finally try playing the great genius Kokumbo. Everyone knows Kojumbo genius. Therefore, the game is brilliant. There was a global catastrophe. The big explosion changed the familiar world and the water began to go away. All marine animals are stranded. Death spread all over the planet. There were strange dark creatures.

The sample images show a watery landscape with looming dark figures in the background, accompanied by ominous instructions like “SURVIVE AND PROTECT THE FLASK.” (The “flask” is a reference to Death Stranding‘s arresting image of a fetus or newborn baby in a flask, carried by characters played by Norman Reedus and director Guillermo del Toro.)

You won’t be shocked to hear that Deadly Stranding‘s gameplay is… a little basic. While Death Stranding is a high-concept game with expensive graphics and thought-provoking symbolism, Deadly Standing involves driving a truck and shooting people. YouTuber Uptodown shared some gameplay footage, and it looks like this game is worth every one of the zero dollars it costs to install.

The best thing about Deadly Standing may be its reviews. “Genius Kojumbo has outdone himself again,” reads one five-star review, while another complains about the “poor acting” from “Boreman Fetus and Bads Fakkelson.” It’s averaging a respectable 3.4-star rating overall.

Ripoff games aren’t exactly unusual, but Deadly Standing is inspiring a more positive response than most. That’s probably due to the unique response to Death Stranding itself. The trailers are fascinating and Kojima has a passionate fanbase, but those fans are pretty self-aware about the game’s aggressively enigmatic marketing. At this point, Death Stranding is both an enticing mystery and a meme unto itself, with even its lead actors failing to articulate what the game is actually about.