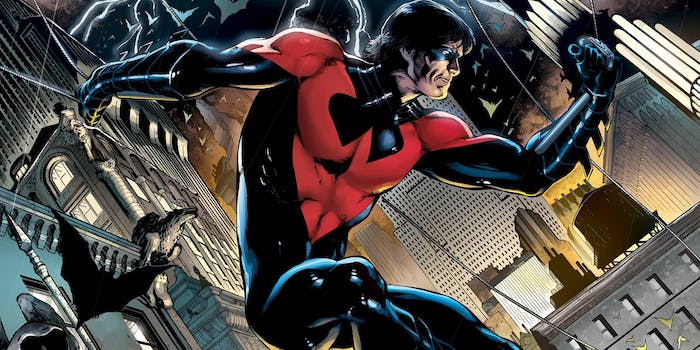 The pilot for ‘Teen Titans’ will be filmed in 2015

Next year's 'Teen Titans' pilot will focus on Nightwing

It’s been a long road to a new Teen Titans series—and finally getting to see Robin’s Nightwing in his element—but the wait is almost over.

On Tuesday, a smart fan asked DC‘s Chief Creative Officer Geoff Johns for a progress report on Twitter. Johns responded with a surprise:

@kyler416 We shoot the pilot next year!

@kyler416 Long time coming to get Nightwing to live action…!

If you’re not familiar with the Teen Titans (not to be confused with the attacking variety), you’re in for a treat. TV was practically made for a hit live-action series about a group of adventurous, cynical teen crime-fighters. It’s like the action sequences of Power Rangers combined with the quirky fun of The Flash.

We don’t know much about who will comprise the new group of titans, which historically has had a rotating crew. But the new series will focus on the most famous—Robin, Dick Grayson—in the period after he hangs up his sidekick cowl and takes over the nebulous superhero identity of Nightwing. Before Grayson made it his own, Nightwing was more of a job title than a persona.

Given the tendency for DC’s recent crop of live-action adaptations of superhero epics to delve into the psychology of its heroes, we can probably expect something similar from the new series, combined with the fun of a group of teens fighting evil while, you know, being teens.

And if you’re having trouble surviving the wait until you finally get to see one of DC’s most famous superheroes in his own live-action series, don’t worry: If you start reading this Teen Titan fanfic now, you might be finished by the time the pilot finally airs.