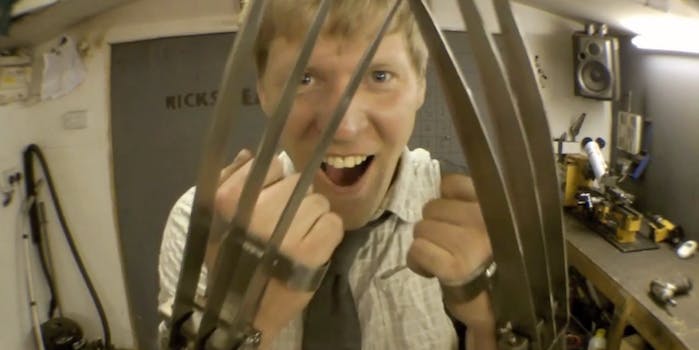 This guy made real-life Wolverine claws, and you can too

He found a way to be a mutant without the pain Logan has to experience.

Colin Furze doesn’t need a mutant power to be a member of the X-Men.

In preparation for X-Men: Days of Future Past, the Gadget Geeks host is planning to replicate the powers and abilities of a different mutant every week, and naturally, for his first go at it, he took on the most famous X-Man of them all.

DIY Wolverine claws have been done before, but Furze believes that he’s created the first fully-automatic pair of claws that both deploy and retract using compressed air.

Furze is like a kid in a candy store full of presents on Christmas. It’s pure, unadulterated joy.

But if you’re more interested in the mechanics of a superhero’s claws, he provided a video on how he made them, which included making sure that each piece of metal would spread out as it shot up.

Perhaps Hugh Jackman could get his hands on a set for the next X-Men movie?