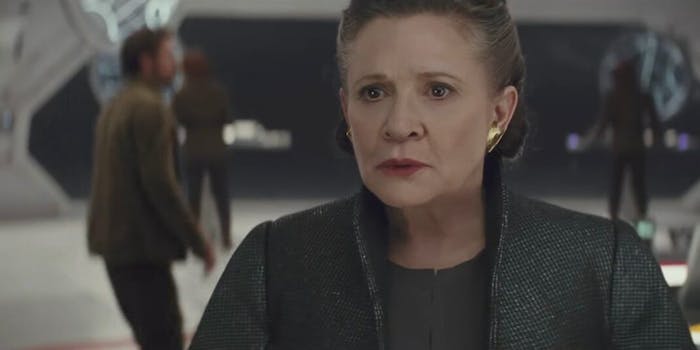 Star Wars fans can’t get enough of the newest Last Jedi trailer as they analyze every frame and use it to make a bunch of memes. But a new photo reaction to the trailer reminds us just how emotional this film will be for many fans.

Gary the French bulldog was constantly at Carrie Fisher’s side during the Force Awakens press tour and became a social media star in his own right. After Fisher’s death last year, her assistant Corbin McCoin adopted him, and Gary returned to posting on social media, often using the hashtags #garyloveshismom and #garymisseshismom in Instagram captions.

In his latest post, Gary is seen watching Fisher as General Leia Organa in the Last Jedi trailer, with the caption that “my mom looks more beautiful than ever.”

If a handful of shots of Leia in the trailer are enough to strike fans (and Gary) right in the heartstrings, we can only imagine how sad we’ll be feeling when we see her on the screen for the last time.