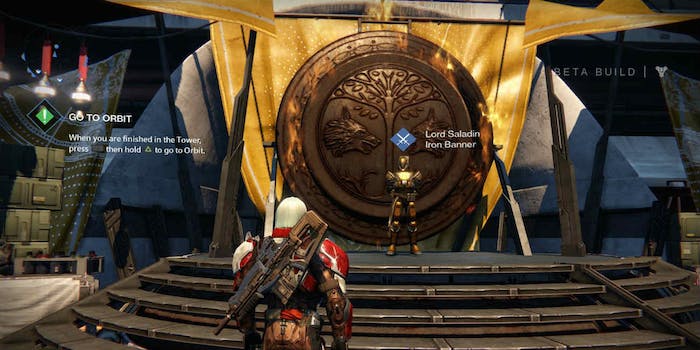 Bungie promises the next Iron Banner event will actually work

If you expected to obliterate your foes in Destiny’s last Iron Banner event but had low-level players wiping the floor with you, an opportunity for vengeance is close at hand.

Destiny developer Bungie promised in a recent post that a new, properly functioning Iron Banner event is on the way. Level advantages will actually mean something, such that higher level players ought to be able to crush low-level opponents.

Losers in new and improved Iron Banner matches will receive consolation items that translate into rewards with their next Iron Banner win. The power of unique armor and weapons available through the event will be increased so as to make them worth pursuing. And a bevy of other changes will make the Iron Banner mode more worth players’ time.

The original Iron Banner event ran from Oct. 7 to Oct. 14. Iron Banner matches in the Crucible, the competitive player-versus-player mode in Destiny, were supposed to allow for discrepancies in player ability based on their experience level, whereas normal Crucible matches are supposed to be balanced against these sorts of mismatches.

Iron Banner matches were absolutely not as advertised, with low-level players able to stand toe-to-toe with and even dominate high-level players.

The Iron Banner event also rewarded players with unique reputation points, which unlocked event-specific items for purchase. Those reputation points were only awarded to players who won, however, so at the first sign that their team was going to lose the match, players abandoned ship, ostensibly so as not to waste their time.

Destiny is rather short on content, and will continue to be until the first expansion, The Dark Below, is released on an as-yet-unspecified date this December. Special events are the best Bungie has to throw at players, and so far, they haven’t been so good. The previous event, Queen’s Wrath, which was held from Sep. 23 to Oct. 6, will also undergo improvements, though Bungie has declined to give a prospective date for the return of the Queen.