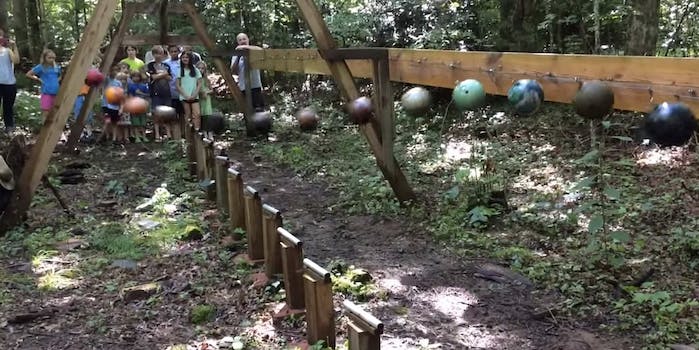 This bowling ball experiment demonstrates the beauty of physics

This video is mesmerizing.

Sixteen bowling balls strung from a wooden frame swing back and forth in unison, then in an undulating curve, then into seeming chaos before lining up once again.

This hypnotic video, peppered with awestruck cries from the onlookers, demonstrates the beauty of math and physics.

Each bowling ball takes a slightly different period of time to swing back and forth. This period depends on the length of the pendulum, not the mass of the ball. Longer pendulums take longer to swing than shorter ones do. The cool way these pendulums synch up has to do with the precise calculations that went into constructing the demonstration. The video description on YouTube.com explains:

Pendulums are a basic concept in physics and the wave demonstration is a common way to illustrate some of their properties. Since there is a clear relationship between the length and the oscillation period, you can calculate the pendulum lengths by counting those back and forths. Also, you can even build one yourself.

“I was impressed by the idea that the patterns we see are equally in the math and in our minds,” writes the demonstration’s creator Jeff Goldblum on his blog. He teaches at Appalachian State University in Boone, N.C. “They are real patterns, but they come about from the relationship of separate objects.” His post also features more videos (including one in slow motion) and explains why the bowling balls don’t line up perfectly.

“It wasn’t so easy, and it never was perfect,” he writes. The weight of the ball did change how far out the ball swung over time, the weight of the cable and hooks altered the center of mass for lighter balls, and the beam flexed a bit. “However, it got good enough for us to feel satisfied, and we learned some of the limitations of our materials,” he adds.

Certainly the end result is hypnotic.