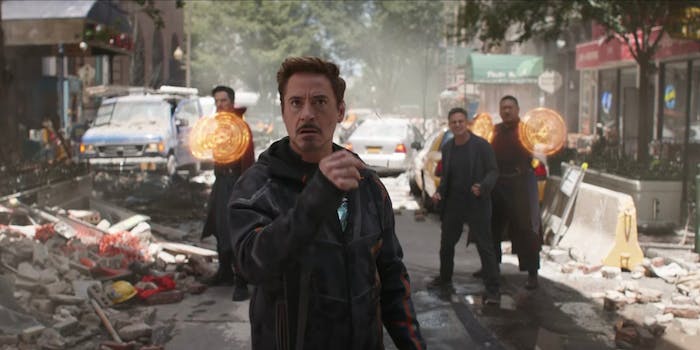 Marvel bumps up the release date for ‘Avengers: Infinity War’

With some help from Tony Stark.

Avengers: Infinity War was originally set for released May 4, so the new date pushes the movie up by one week. And instead of just casually revealing the new date in a trailer or a poster, it recruited Robert Downey, Jr.

It started, innocently enough, with Marvel Studios’ Twitter account gauging how excited people were for Avengers: Infinity War to come out soon now that it’s the next Marvel movie to arrive in theaters after Black Panther.

On a scale of one to infinity, how excited are you to see #InfinityWar on May 4th? pic.twitter.com/72jYKj2ODG

And while many fans would love to have the movie as early as possible, Downey Jr. added his enthusiasm for seeing it earlier. And if anybody can get that movie earlier—a week earlier to be precise—it’s Iron Man himself.

Any chance I could see it earlier?

Downey Jr. pushed slowly, first asking if he could get his friends to see it with him before going all in and asking if the rest of the world could get it earlier.

Luckily for him (and all of us), Marvel Studios was in a good mood today, and it had a poster handy with the new date.

You guys wanted it. You got it. See you there April 27th. pic.twitter.com/DsllNH2ko6

It’s not uncommon to see movie dates switch around from big studios, although it usually doesn’t happen so close to planned release dates. But moving the release date up to April 27 gives Avengers: Infinity War a little breathing room in an especially crowded theater lineup. Deadpool 2 is arriving May 18, just two weeks after Avengers: Infinity War’s original release date with Solo: A Star Wars Story (the latter which is owned by Marvel Studios’ parent company Disney) debuting a week after that on May 25.