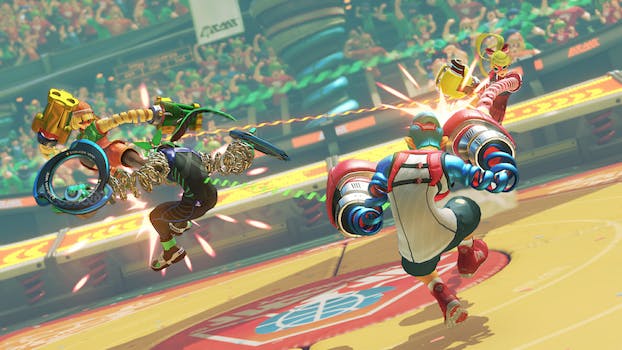 Hands on with ARMS, the next big game for Nintendo Switch

If any one thing felt out of place during the grand unveiling of the Nintendo Switch early this year, it was ARMS. The colorful brawler relies heavily on motion controls, keeping the new system tied to not-so-distant memories of the Wiimote. Many fans felt burned by the Wii U and wanted to leave its gimmicky controllers behind, so for some ARMS was the wrong title to instill confidence that Nintendo had learned any lessons.

But thankfully, ARMS controls well enough without awkwardly flinging the JoyCon around. For a game that relies on precision and fast decision making, the aim support on the Switch is competent regardless of the player’s preferred input. After a dozen hours with the game, I’m still not sure if there is a “best way” to play, though.

The Switch was positioned as the perfect console to take on the go—in a car, on a train, or at the airport—but very few people would want to be throwing their fists in that handheld setting. Analog sticks and face buttons provide a good enough replacement, making ARMS a joy to take on the go. None of the included game modes are too demanding, so it is well-suited for brief sessions of pick-up play.

On the flip side, ARMS does feel like it might lack depth in the long run. Post-launch content support has already been announced and will likely convince more than a few Nintendo diehards to drop the cash on the game the first day it is available. With titles like Splatoon and Mario Kart 8, the developer has a history of providing meaningful reasons to come back to these multiplayer-focused titles as time goes on.

At launch, this game doesn’t feel as barren as some other fighting games in recent memory, but the handful of modes offered rarely play out the same way due to the extensive customization of the characters. Where most titles in the genre die by the size of their roster, ARMS takes a different approach. There are only 10 characters to choose from, but with an added layer of depth thanks to 30 pairs of weaponized limbs to swap out.

The titular appendages offer more than just aesthetic variation, as each piece comes with a different weight and elemental bonus. It’s not enough to just swing and hit your opponent, you need to take their loadout into consideration. Throwing a light arm at a heavier enemy means they can swat your attack out of the air and quickly counter you. Two equally classed fists will cancel each other out, leaving both attackers stunned.

ARMS gets delightfully challenging as you unlock more items for each character, and when you begin to learn the right strategy to counter certain opponents. Each character starts with three specialty weapons by design, but can access any of the game’s inventory. Since you can equip two weapons at once, the possibilities will increase exponentially over time.

Several of the available arms are more than just powerful fists to smash things with. They can be used as shields, projectiles, and grant the player unique abilities. No one pair of tools is going to guarantee a path to victory every time, depending on what the opponent brought into the ring.

So far, my time with the game has revealed the core gameplay to be much deeper than I had initially anticipated, but has raised some concerns about the long-term interest I may have in this fighter. A fairly routine loop of activities has already revealed itself, where I will take a character through the Grand Prix, a gauntlet-style single player adventure that lasts roughly 25 minutes, racking up enough points to try for some new equipment.

A live multiplayer demo gave Switch owners the chance to try out a sampling of ARMS’ content recently, and another is scheduled for this weekend. It remains to be seen how the competitive scene for this game will shake out, but it seems like this will be a strong option for Switch owners looking for some online action.