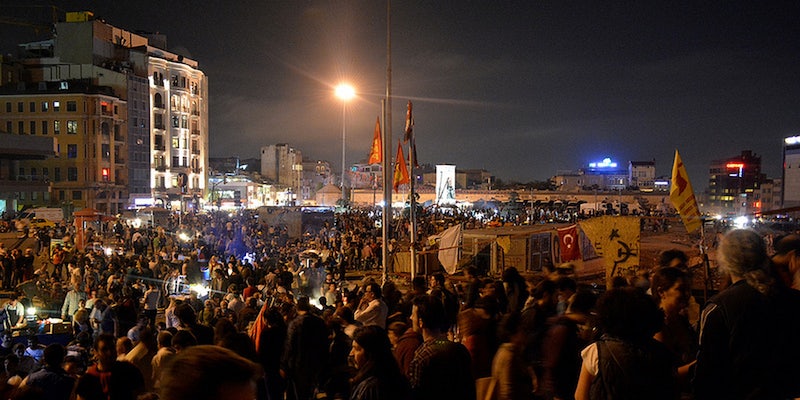 Turkey’s Ministry of Justice has “started working on a draft on crimes over the Internet,” ministry sources said.

Turkey’s prime minister, Recep Tayyip Erdogan, is not a fan of social media. Small wonder, given the extent to which Istanbul’s Gezi Park protesters have seen it amplify their message. But now the Turkish government is taking steps to make good on their threats to outlaw it.

Turkey’s Ministry of Justice has “started working on a draft on crimes over the Internet,” ministry sources told the Hürriyet Daily News.

This was seconded by a threatening statement by Turkish Interior Minister Muammer Güler.

“We have a study on those who provoke the public via manipulations with false news and lead them to actions that would threaten the security of life and property by using Twitter, Facebook or other tools of the social media. Still, we think that the issue needs a separate regulation.”

Erdogan and his Peace and Development Party, known by its Turkish acronym AK, have proven very popular in Turkey’s electoral landscape, winning election after election for years. This popularity, along with the righteousness that inheres to any strong ideology (in this case, political Islam) and his own personality, has lead the PM to micromanage the country, the still ethnically and socially complex inheritor of the Ottoman Empire.

This high-handedness has led Erdogan to make decisions like the development of the park around which the original Stambouli protesters gathered into a shopping mall, a decision which has, at least for now, been halted.

The fact that protests leapt from Istanbul to other Turkish cities, like Izmir on the Mediterranean coast and the country’s Anatolian capital Ankara, indicates a dissatisfaction by a sizeable cross-section of Turkish citizens.

Erdogan’s AK Party’s fear and contempt for social media did not leap fully formed from the Gezi protests. It has a long, deep history of censorship. Just a few of the social media tools that have seen Turkish censorship are YouTube, Google Docs and Books, and Vimeo. According to last November’s Transparency Report from Google, Turkish requests for removal shot up 1,013 percent over the previous year.

Instead, Facebook said it directs such government agents “to formal legal channels unless it appears that there is an immediate threat to life or a child, which has been the case in only a small fraction of the requests we have received.”

Turkish government officials are planning to visit Facebook’s Silicon Valley headquarters next week, at which time, the statement said, Facebook representatives “intend to communicate (their) strong concerns about these proposals directly at that time.”

Turkey has a suite of laws forbidding speech that insults “Turkishness” among other things. As with most laws limiting free speech, this one suffers from a vagueness that makes it easily used as a legislative weapon.

The attempt to forge a modern nation state from the old Empire has resulted in a hard line on ethnic differentiation, most notably against the Kurds, a Persian-language speaking ethnic minority. Armed Kurdish groups demanding more autonomy have been a source of distress in the country for decades.

The country also now enforces new laws criminalizing irreverent religious speech, such as recently resulted in the 13 month jail sentence for an Armenian-Turkish journalist who posted his opinion that uploading “The Innocence of Muslims” was not a hate crime.