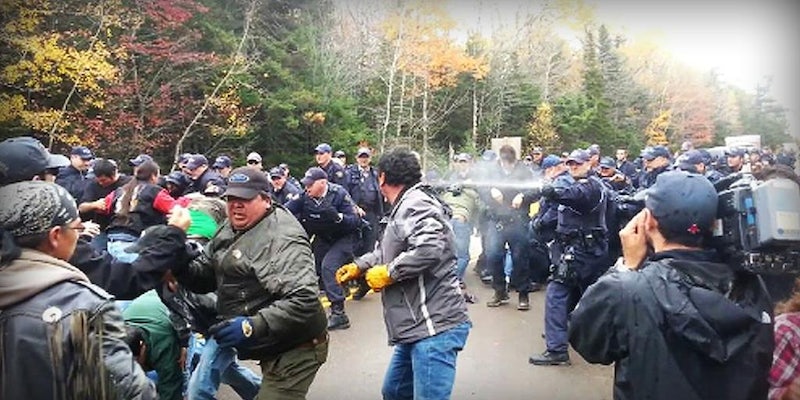 Authorities have confirmed at least 40 arrests.

What started as a peaceful protest by the Mi’kmaq First Nation in Elsipogtog, New Brunswick against a shale gas project has now spun violently out of control. After the Royal Canadian Mounted Police (RCMP) advanced on the anti-fracking protest, demonstrators clashed with police, chemical agents were deployed and at least half a dozen police vehicles were destroyed by Molotov cocktails.

At least 40 arrests have been confirmed by authorities, who also report that a gunshot was fired. According to the New Brunswick police, their officers have not discharged their firearms. The First Nation protesters have accused the RCMP of causing the clash by raiding their anti-fracking protest with arms drawn.

Twitter was immediately flooded with images of the chaos, including photographs of the burning vehicles, followed by the hashtags #Rexton and #Elsipogtog. Numerous images of military snipers and exploding trucks spread around social media. So did a rather serene photograph of a woman on her knees in front of 20-plus police officers, holding a single feather up in the air.

According to Canadian press, the Mi’kmaq claim that while being arrested, a chief was “manhandled” by the RCMP, then “all hell broke loose.” A photograph of Chief Arren Sock quickly circulated online, showing police leading him and several members of his council away in plastic handcuffs. A former Mi’kmaq chief also told the press that weapons firing less-than-lethal rubber bullets had been used on the crowd, as well as tasers and police dogs.

Demonstrations in New Brunswick have been continuous for the past several months. The Mi’kmaq believe the fracking operations are dangerous to the environment, animal life, and residents in the surrounding area. Barricades were erected by demonstrations along Route 134 in Rexton to prevent the oil and gas company SWN Resources Canada from transporting their equipment.

On Oct. 1, Chief Sock and 400 First Nation supporters delivered an eviction notice to SWN. “We have been compelled to act to save our water, land, and animals from ruin,” the chief said, addressing the crowd. During his speech, he also promised to take the reserve land back from fracking company and return it to the Mi’kmaq people.

Fellow Canadians, this is the side you want to be on. Be half as brave as that little girl. #Elsipogtog #cdnpoli pic.twitter.com/51Hm14QpZu

At least 100 RCMP officers on route 134. More police on other side of blockade. #nb pic.twitter.com/a5UexivDdy

Many of the tweets about the clash in New Brunswick include the hashtag #IdleNoMore, the name of an ongoing movement in Canada that includes the First Nations. The movement originated in December 2012 as a protest against Prime Minister Stephen Harper and the passage of the Jobs and Growth Act (Bill C-45), which the First Nations claim is an infringement upon their indigenous treaty rights. Amendments in the bill removed certain government environmental protections, which opened bodies of water near the First Nations for exploitation by the oil and gas industry.

A shot was heard in the woods #elsipogtog #idlenomore

Tensions between the Canadian government and the First Nations have resulted in violence in the past. A 78-day dispute in 1990 known as the Oka Crisis turned deadly when developers attempted to build a golf course on top of a Mohawk burial ground. During a 15-minute exchange of gunfire, an officer was hit and eventually died from his wounds.

Correction: The original version of this story identified Mi’Kmag First Nation as the Elsipogtog, which is the name of the area in which they reside.