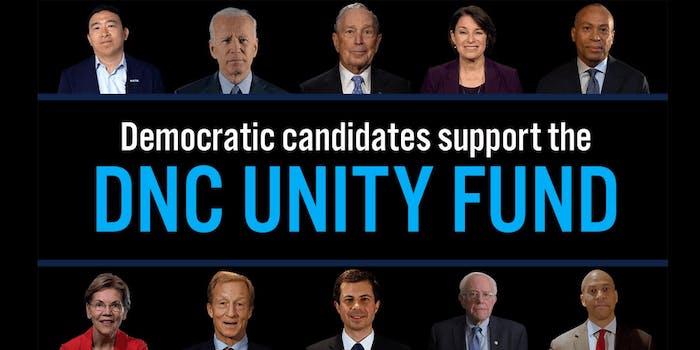 Why was Tulsi Gabbard excluded from this DNC election ad?

One candidate in the ad is polling lower than the Hawaii representative.

Rep. Tulsi Gabbard (D-Hawaii) appears to have been excluded from the Democrat’s new presidential election advertisement.

In a video sent out by the Democratic Party’s official Twitter account on Monday, followers are urged to donate to the Democratic National Committee’s (DNC) Unity Fund.

“With less than a year until November 3, 2020, we must come together now and work towards the common goal of defeating Donald Trump and sending a Democrat to the White House,” the tweet states.

With less than a year until November 3, 2020, we must come together now and work towards the common goal of defeating Donald Trump and sending a Democrat to the White House.

Gabbard, however, is nowhere to be seen. The apparent discrepancy was quickly noticed by supporters of Gabbard who accused the DNC of purposefully excluding the candidate.

“Democrats have excluded a woman of color and Hindu candidate from this ad,” Twitter user @TULSI20203 wrote.

Your deliberate omission of @TulsiGabbard speaks volumes about your promise of equal opportunity for all candidates as stated in Article 1: sec 4 of the DNC charter. And to all the candidates who participated in this obvious attempt to exclude Tulsi should be ashamed.

Another Twitter user argued that Gabbard should have appeared given that she is polling higher than at least one of the candidates featured in the ad.

“Tulsi Gabbard is in it to win it and is polling better than … candidates in this image,” user @drink_oat_milk added.

Polling numbers released on Monday evening do show Gabbard at around only 2%. But former Massachusetts Gov. Deval Patrick, who appears in the ad, is polling even lower.

And while Gabbard may have a tense history with the DNC, the representative is not the only candidate missing from the ad.

Candidates who were polling at 1% were not present in the video, including former Secretary of Housing and Urban Development Julián Castro, author Marianne Williamson and former Rep. John Delaney.