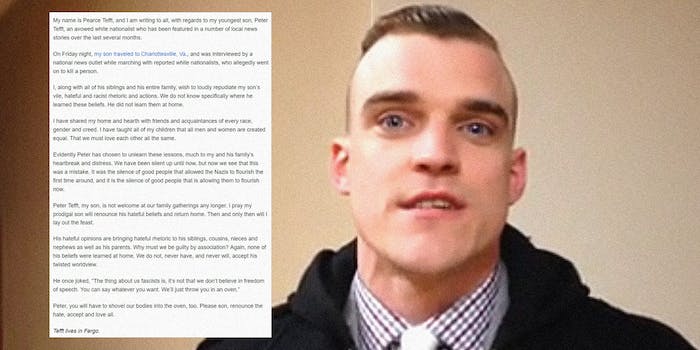 'Peter Tefft, my son, is not welcome at our family gatherings any longer.'

A father has publicly denounced his son for holding racist views following his participation in this weekend’s violent white supremacist rally in Charlottesville, Virginia.

“My name is Pearce Tefft, and I am writing to all, with regards to my youngest son, Peter Tefft, an avowed white nationalist who has been featured in a number of local news stories over the last several months,” the father began in his letter to the editor, which appeared on the news site Inforum.

The younger Tefft was identified on Twitter as a white nationalist attendee of the “Unite the Right” rally in Charlottesville, which turned violent on Saturday. Peter posted photos of himself in Charlottesville and statements about the rally on his Twitter and Facebook profiles.

“I, along with all of his siblings and his entire family, wish to loudly repudiate my son’s vile, hateful, and racist rhetoric and actions,” Pearce wrote in his letter. “We do not know specifically where he learned these beliefs. He did not learn them at home.”

“Peter Tefft, my son, is not welcome at our family gatherings any longer. I pray my prodigal son will renounce his hateful beliefs and return home. Then and only then will I lay out the feast.

“His hateful opinions are bringing hateful rhetoric to his siblings, cousins, nieces and nephews as well as his parents. Why must we be guilty by association? Again, none of his beliefs were learned at home. We do not, never have, and never will, accept his twisted worldview.”

“In brief, we reject him wholly—both him personally as a vile person who has HIMSELF made violent threats against our family, and also his hideous ideology, which we abhor. We are all bleeding-heart liberals who believe in the fundamental equality of all human beings,” Scott said in a statement. “Peter is a maniac, who has turned away from all of us and gone down some insane internet rabbit-hole and turned into a crazy Nazi. He scares us all, we don’t feel safe around him, and we don’t know how he came to be this way. My grandfather feels especially grieved, as though he has failed as a father.”

The controversial rally in Charlottesville turned tragic on Saturday after a young Ohio man, 20-year-old James Fields Jr., who is reportedly associated with white supremacists plowed his car into a group of counterprotesters, injuring 19 and killing one woman, 32-year-old Heather Heyer of Charlottesville.

In a post on Facebook, Peter claimed local and state authorities were to blame for violence in Charlottesville. “Any blood is on the hands of the police, the city of Charlottesville and the state of Virginia,” he wrote. Peter also questioned whether Fields had ties to the alt-right because his mother has a Jewish-sounding name and “the alt-right as a movement is very critical of Jews and membership of Jews in the alt-right is frowned upon.”