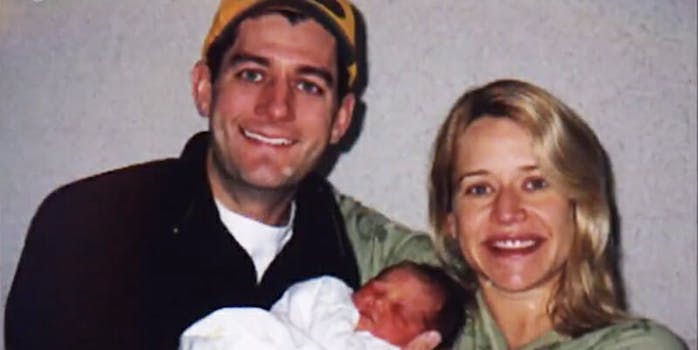 John Legend to Paul Ryan over his Father’s Day tweet: ‘F**k you’

Many people are finding the concept of Father’s Day to be an unpalatable one this year, due to the fact that thousands of migrant children are currently being ripped from their families and held in what are essentially incarceration centers. And then, there’s soon to be retiring House Speaker Paul Ryan.

On Saturday, Ryan tweeted out the following tone-deaf message wishing “all the dads out there” a happy Father’s Day, accompanied by a schmoopy video detailing what being a father has meant to him over the years—complete with sunny photos of his family.

My life changed the day I became a father. Liza, Charlie, and Sam are my highest priority. Wishing all of the dads out there a happy early #FathersDay pic.twitter.com/w3UsSkR4Lf

Suffice to say, the ratio quickly got out of hand (not surprising, given the source), but few said it more bluntly than John Legend—who retweeted Ryan with a simple “fuck you.” “Reunite the families at the border and we can talk about father’s day,” he added.

Seriously, fuck you. Reunite the families at the border and we can talk about father's day. https://t.co/bbG0gVqfzq

The day must be bittersweet as well for Legend, who just welcomed his second child with wife Chrissy Teigen last month—Miles Theodore Legend, who joins his 2-year-old big sister Luna May.

The whole thing smacks of the recent Samantha Bee controversy. The Full Frontal host took flack for calling Ivanka Trump a “feckless cunt” in response to the first daughter tweeting a photo of herself holding her own 2-year-old son Theodore, amid reactions to the news that the Department of Health and Human Services had lost track of more than 1,400 children who had crossed the U.S. border without a parent.

As Trump continues to lash out and blame Democrats for the separation policy (which was, in fact, reportedly at the urging of his senior adviser Stephen Miller), it seems as though little will change anytime soon.