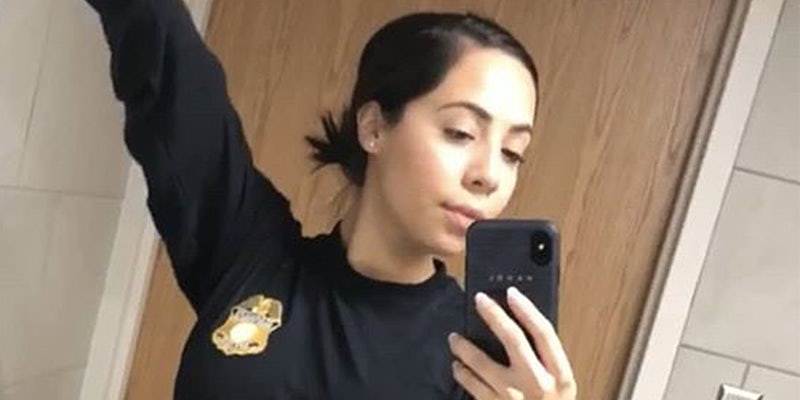 As the Border Patrol reveals controversial #ICEBae's true identity and says she's free to post more selfies, it turns out her viral fame was a targeted troll.

A conservative Black activist, Bryan “Hotep Jesus” Sharpe, who has appeared on Joe Rogan’s podcast, Fox News, and is selling a recent book on Twitter marketing, catapulted the #ICEBae to viral fame on Monday.

On Wednesday, she thanked him in a video. Sharpe has also been criticized for anti-Semitism.

Controversial internet star Kiara “#ICEBae” Cervantes arrived on social media this week amid speculation about her identity. Was her virality, which stemmed from a photo where she was apparently providing security to Vice President Mike Pence in Texas, an organic spike or shady public relations for the oft-criticized agency? Which of the Twitter and Instagram accounts featuring her photos were actually real? And was the woman taking a mirror selfie in uniform, and posting short videos, actually a Border Patrol employee?

As the New York Post reports on Wednesday, U.S. Customs and Border Protection confirmed via email that yes, she’s an officer—and the agency is good with all that viral fame, saying Cervantes is free to post more selfies.

“CBP does not restrict employees from participating in social media for personal use … As we have previously said, CBP employees are held to the highest expectation of conduct, both on and off duty and must adhere to CBP’s standards of conduct,” the agency told the Post.

According to the Post, the Pence photo was a photoshopped fake. Cervantes’ other viral photo, a mirror selfie in uniform, reportedly did not meet the Border Patrol’s code of conduct standards and was deleted from social media. But early Wednesday, Cervantes returned in full force to Twitter, posting short videos addressing her newfound fame—where she thanked Sharpe at the end.

Indeed, Sharpe, who now boasts more than 100,000 Twitter followers after his #ICEBae tweets, was among the first users to tweet about the “#ICEBae.” He also tweeted several #ICEBae memes.

On Tuesday he tweeted a photo from the Post with the caption, “Front page. We did that.”

Amid recent testimonials from fans that his marketing book can make one “5 figures on Twitter” in six months, Sharpe also retweeted a conspiracy from user @OrangeJello23: “What if [Sharpe] and #IceBae knew each other this whole time, and he waited until he was close to 100k followers to have her make a video and a Twitter account and push him over the top? I really gotta buy his book.”

Cervantes addressed the past 48 hours in an early Wednesday Twitter video.

“I still am getting used to this, whatever this may be… I want to reach out to younger women and show them to work hard and to get an education… to be respectful, to be kind, to be humble,” Cervantes said in a Twitter video, before adding this is all that she wants from her “15 minutes of fame,” though she didn’t close the door on producing more social media content.

She added that she doesn’t let the “negativity” affect her—and there has been a lot of it.

Cervantes has been criticized on social media for being complicit in family separation at the border, and the poor conditions that Central American immigrants are being received at the border in.

“How does it feel to be in that position? Knowing how all those people in cages are IN CAGES! And you… guard? watch them?” a Twitter user responded to Cervantes’ video.

Despite her viral nickname, Cervantes works for the Border Patrol and not the U.S. Immigration and Customs Enforcement (ICE). She is also reportedly a registered Democrat.

We’ve reached out to Cervantes.

Update 4:55pm CT, July 17: In an emailed statement to the Daily Dot, Sharpe’s manager maintained that Sharpe is not a conservative. “Hoteps BEEN Told You” was the only comment we received from Sharpe through his manager.

“Hotep Jesus wrote the book on dominating Twitter. He’s consistently created national viral stories. It’s amazing and revealing that no one in media or politics has tried to work with him,” his manager wrote.