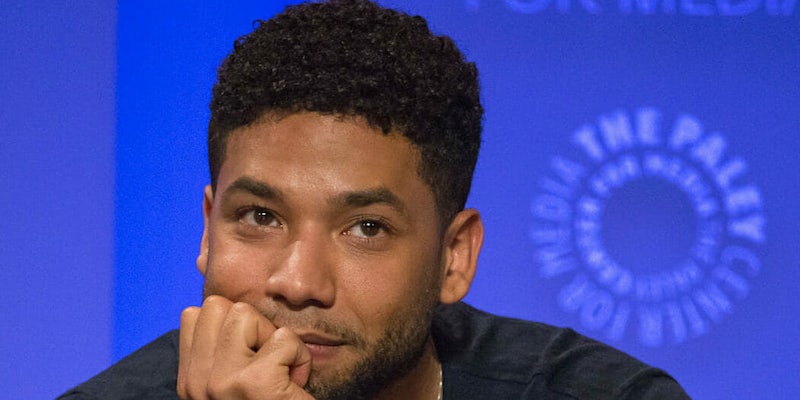 Lots of people watch 'Empire,' even if Katrina Pierson hasn't.

Empire actor Jussie Smollett was attacked early Tuesday morning in what Chicago police are calling a possible hate crime, but some conservatives don’t believe one of their own is responsible.

And it’s because they’re claiming to have never watched his TV show.

Smollett is Black and came out as gay in 2015. According to the Chicago Sun-Times, the alleged attackers taunted Smollett with racist and homophobic slurs, poured an unknown substance on him (widely reported as bleach), and wrapped a rope around his neck.

While Chicago police public information officer Anthony Guglielmi told the Sun-Times that the assailants made statements suggesting they knew who Smollett was, some conservatives doubt the narrative.

The veracity of the MAGA statement is unknown, but conservatives have a defense anyway. Katrina Pierson, a former Trump campaign spokesperson, tweeted her disbelief Wednesday.

“I’m still stuck on MAGA supporters who watch Empire!? Or, would know who he is? It’s befuddling – because I don’t and wouldn’t recognize him.”

So let me get this straight: There were folks present in this area at 2am in a polar vortex. They were waiting for a gay, black man to attack. They recognized this guy from a show I've never heard of, through the hat, coat, scarf and gloves he was wearing because of the cold.

Others had a similar response.

Doesn’t this one seems bit off tho? MAGA guys watch Empire, happen to have bleach and a noose at 2am? Just feels off.

The defense of “we don’t watch Empire” is telling. Empire is a show predominantly about Black experience and proudly boasting that people with your political affiliation are ignorant of one of the most popular shows on television reveals the cultural biases that permeate MAGA types.

Empire is filmed in Chicago; since its debut in 2015, the show has received critical praise. While viewership has dropped, its first two seasons were hugely popular—it was the fifth most-watched show on television in those first two seasons.

Smollett plays the son of the two main characters, Lucious and Cookie Lyon, and is himself a major character on the show.

The FBI is investigating a suspicious letter also sent to Fox about Smollett, containing threatening, racist language, and a white powdery substance, according to the Sun-Times.

The Daily Dot reached out to Chicago police for an update but did not receive a response by press time.