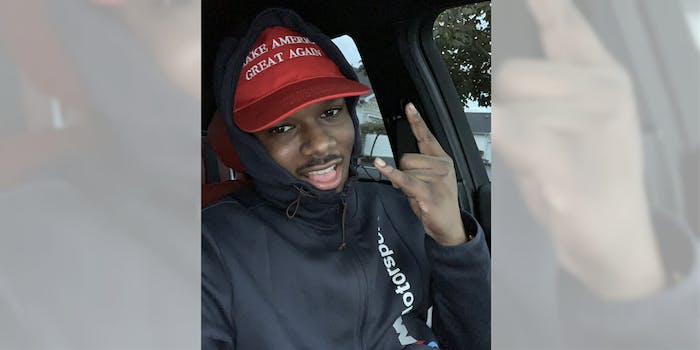 He says the tweet was part of his 'comedy.'

People on Twitter were aghast Monday to learn others were donating money to the GoFundMe page of an Ohio man who was fired over a transphobic tweet.

On Oct. 22, Joseph Kynard (@jodackblack) tweeted side-by-side screenshots: One was of a report that the Trump administration planned to end legal recognition of transgender identities in the U.S. Another was of an online shopping cart containing a “Make America Great Again.”

The same day, a tweet with photos of Kynard was addressed to Huntington Bank, Kynard’s employer.

“How do you feel about your relationship banker Joseph Kynard being openly transphobic and disgusting on social media,” the user wrote. “I’m closing my account early tomorrow morning at Mt Vernon, Ohio location.”

The bank’s Twitter account responded the next day to say it would “make sure the situation is addressed appropriately.”

Thank you for bringing this to our attention. We will make sure the situation is addressed appropriately.

Kynard claimed that he was doxed by strangers online, who sent his employer several tweets in addition to the first controversial tweet.

“They pulled old tweets that offended people, this was my first ever tweet that was transphobic,” Kynard told the Daily Dot. “They found whatever they could to get me fired and sent it to my job.”

The other tweets that were referenced mostly contained nude photos and profanity, according to Kynard.

He was fired from Huntington Bank on Nov. 19. He shared the details of his termination and the resulting expenses in a YouTube video posted on Nov. 25. He also started a GoFundMe for his living expenses on Nov. 22, which by the time of writing had collected about $2,000.

Kynard admitted that when he tweeted about the possible legal change by the Trump administration regarding transgender people, he didn’t know much about the legislation.

“I had no specific feelings about the legislation itself,” Kynard said in the YouTube video. “To tell you the truth, I didn’t even know what the legislation was when I tweeted it. I was just making a joke.”

Several people on Twitter criticized Kynard’s GoFundMe campaign, citing his transphobic tweet as reason not to support his fundraiser. Kynard said he isn’t worried about his page being shut down because he was transparent about why he created the fundraiser and even included a link to the tweet from Huntington Bank.

He maintains that his comment was meant to be a joke and that he is not transphobic.

“I have nothing against trans people and I’m not transphobic,” Kynard told the Daily Dot. “I mind my own business but my comedy spilled into their community which sparked all of this.”

GoFundMe did not immediately respond to the Daily Dot’s request for comment.