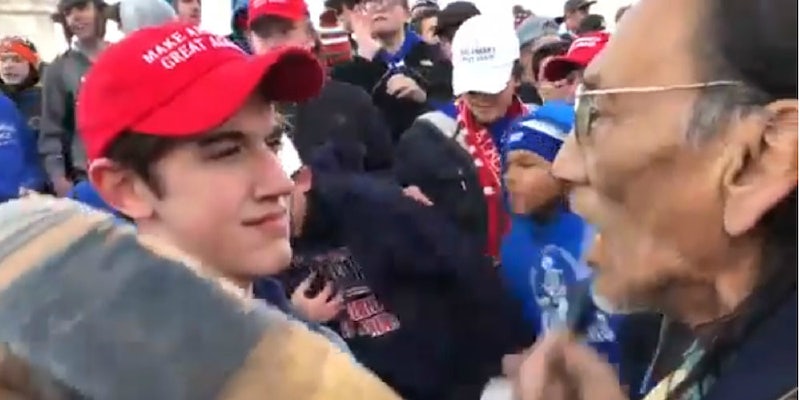 Even with the release of a longer video, many are not buying this.

Videos of students in MAGA hats appearing to surround and mock a Native American elder spread like wildfire this weekend, sparking conversations about white entitlement and the impact of Trump’s presidency on galvanizing hate. Now, with the release of a longer video, it seems the more info we have, the worse the situation seems to get.

Jan. 18 was a big day for protests in Washington, D.C., hosting both the annual anti-abortion March for Life, as well as the Indigenous Peoples March. With these disparate groups of demonstrators all convening on the capital at the same time, as well as other protesters and agitators, conflict was waiting to happen.

The viral incident allegedly began brewing when a fringe group called the Black Hebrew Israelites, who have previously been accused of anti-Semitism and homophobia, started yelling at people near the steps of the Lincoln Memorial. In a nearly two-hour-long video recorded by one of the Black Hebrew Israelites, they can be seen yelling at the teens, calling them “incest babies” and using homophobic slurs. In the same video, they also harass attendees of the Indigenous Peoples March, saying that their land was taken from them because they don’t worship God.

The MAGA-hat-wearing teens responded by chanting and yelling, and as tensions continued to escalate, the video shows that the two groups are separated by a small group of Native American people playing the drums, singing, and walking between them. The man leading the group was Nathan Phillips, an elder of the Omaha tribe and a Vietnam War veteran.

“This kept on going on and escalating, it just got to a point where you do something or you walk away, you know?” Phillips told the Detroit Free Press.

Viral videos show Phillips surrounded by teenagers jumping and hollering around him as he plays the drum and sings, with one student standing silently in front of him, refusing to move. Phillips told the Washington Post that things seemed to be getting ugly, so he tried to find an exit, but “that guy in the hat stood in my way, and we were at an impasse. He just blocked my way and wouldn’t allow me to retreat.” A witness said they heard some of the teens yelling, “build the wall” and “gone in 2020.”

According to BuzzFeed News, the boy in the MAGA hat says there’s another side to the story. “The protestor everyone has seen in the video began playing his drum as he waded into the crowd, which parted for him. I did not see anyone try to block his path,” wrote Nick Sandmann in a statement posted on Facebook, which is no longer visible to the public. “He locked eyes with me and approached me.”

Sandmann says that he wasn’t mocking or making faces at Phillips, but was smiling to show, “I was not going to become angry, intimidated, or be provoked into a larger confrontation.” He also says he didn’t hear anyone from his school chanting “build the wall” and that he and his classmates from Covington Catholic High School are “respectful of all races and cultures.”

However, many people are not convinced. What Sandmann says was a smile, many see as a smug smirk. Hunter Hooligan, who was with Phillips in the crowd, said on Instgram the students were “mocking the singing and drumming” and trying to agitate people into a confrontation.

Further evidence to undermine the assertation that Covington boys have respect “for all races”: A Twitter user unearthed what they allege is a photo from a 2015 basketball game at Covington Catholic High School, with multiple students in blackface, and one flashing what appears to be a white power sign at a Black student from the opposing team.