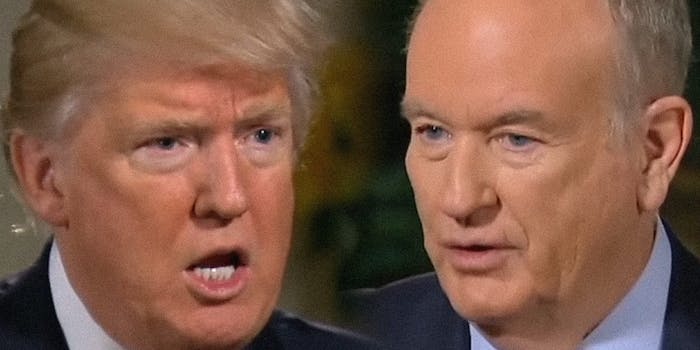 America will decide, just as it has with Trump, that allowing O’Reilly to keep his public platforms is tolerable. What will we decide is OK tomorrow?

Bill O’Reilly has been booted from Fox News, but it won’t matter.

Fox News has shelled out more than $13 million in court settlements to the five women who have accused him of lewd sexual misconduct, according to the Times. After the report went viral, even more accusers came forward, including a female coworker who claimed O’Reilly referred to her as “hot chocolate” in a lascivious manner.

Although O’Reilly is out of a job at the network he called home for 21 years, he will leave Fox News with a hefty payday, rewarded for years of alleged abuse with a fat severance check. CNN reports that the former host will receive “tens of millions of dollars on his way out,” with a source telling the news network that his payout stands to be a “staggering amount.” Roger Ailes, the former Fox News CEO who parted ways with the right-wing channel last year following extremely similar claims, got $40 million as a parting gift from his employer. Ailes, who has continued to do just fine, recently purchased a gorgeous $36 million beachfront property in Florida with the dough.

At no point in this process will O’Reilly truly be made accountable for his alleged actions, just like his boss wasn’t. And why would he? If America rewards an accused sexual predator by making him president, all bets are off when it comes to shitty male behavior.

The O’Reilly allegations are just the latest instance of a powerful man abusing his position of authority to prey on vulnerable women. The Times report claims that the former host of The O’Reilly Factor, the most-watched cable news program in history, would promise women that he would help further their careers as a ruse to get them into bed. That’s a page right out of the Bill Cosby playbook, but it’s a common tactic of abusers—who believe that their power insulates them from conventional morality. As a certain politician once claimed, “you can do anything” when you’re wealthy and male.

At least 10 women accused Donald Trump of sexual harassment during his campaign for the presidency. These allegations were detailed, numerous, and should have been career-killing. Rachel Crooks, a former receptionist at Trump Tower, claimed that the 2016 presidential candidate pinned her in an elevator in 2005, where he kissed her on the cheek and the mouth. Natasha Stoynoff, a staff writer for People magazine who was assigned to the Trump beat, alleged an extremely similar incident at Mar-a-Lago, Trump’s private Florida resort. Stoynoff claims that in 2005, the CEO cornered her in an empty room and made advances, forcibly kissing the reporter while his wife was in the next room.

Although O’Reilly has denied the allegations made against him, saying that his accusers are just opportunists seeking to leverage his high profile for money, Trump attested to the very behavior he would later distance himself from. “I just start kissing them,” he told host Billy Bush on the now-infamous Access Hollywood tape. “It’s like a magnet. I just kiss, I don’t even wait.”

While various public figures, including fellow Republicans, condemned Trump’s behavior, there was no real fallout from these reports being made public. The billionaire, who has also been accused of raping his ex-wife, Ivanka Trump—a claim she later withdrew—still won the presidency. On Nov. 8, 62 million people decided that a woman’s email history was less forgivable than a man who had privately admitted to numerous instances of sexual assault. Although Trump’s poll numbers are historically low, 42 percent of the public still approves of the job he’s doing as president. That’s an estimated 136 million people who are cool with supporting an accused rapist as long as he bombs the Middle East and keeps out the Mexicans.

Dan Hodges, a commentator for the Daily Mail, once tweeted that after “America decided killing children was bearable,” the gun control debate in the U.S. was “over.” Trump’s election was sexual assault’s Sandy Hook moment: the point of no return. When we’ve decided that someone can still be “presidential” after being accused of raping a 13-year-old girl, the conversation about accountability is over.

Millions of men and women were willing to stand by Trump by offering him their votes. Bill O’Reilly will likewise be supported and protected by people who decide that a woman’s right to autonomy and safety is less important than giving a man as many chances as he likes. Male privilege is a punch card that never runs out of punches. The presidents of One America News Network and Newsmax both told Variety that they would be happy to work with O’Reilly in the future. Charles Herring, CEO of One America, said that O’Reilly has “built one heck of a brand.” Newsmax’s Christopher Ruddy added he would be “very open to talking” to the former host about coming on board.

Rest assured, the No Spin Zone will find a new home. O’Reilly, whose show brought in $446 million in ad revenue over a three-year period, commands a major audience who will follow him to any network he signs on with. Loyal fans don’t seem to care much about the allegations. After the scandal broke, ratings for The O’Reilly Factor increased, shooting up 20 percent. Maybe those viewers were just curious about how O’Reilly would respond. Maybe they just decided that excusing an abuser’s actions is more important than listening to his alleged victims.

Of course, there will be backlash if O’Reilly gets a new show. Dozens of advertisers will refuse to do business with him, just as they have his Fox News program. But others will look past his checkered history. The media will move onto the next abuser making headlines, and even his most ardent protesters will find another cause. O’Reilly will get away with it—and he might even get a multi-million dollar mansion out of the deal.

America will decide, just as it has with Trump, that allowing O’Reilly to keep his public platforms is tolerable. What will we decide is OK tomorrow?