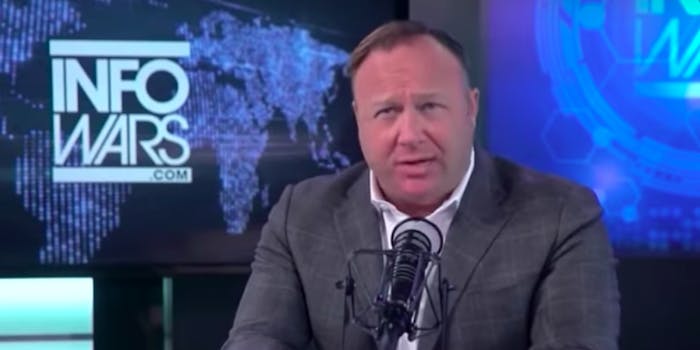 Alex Jones to hand over documents to Sandy Hook families

The action will give plaintiffs access to communications and financial records, which could give insight into the inner workings of InfoWars.

Conspiracy theorist Alex Jones’  legal team will have to hand over communication and marketing and financial documents to six families of victims of the Sandy Hook school shooting, a Connecticut court ruled Friday.

Family members of six victims who were killed in the shooting, along with an emergency responder who came to the scene, filed a lawsuit against Jones in May 2018, alleging that the InfoWars host “persisted in the perpetuation and propagation of this outrageous, deeply painful, and defamatory lie in the face of a mountain of evidence to the contrary, and with no supporting evidence” since the Newtown, Connecticut elementary school shooting in December 2012.

One of the crucial allegations in the lawsuit claims that Jones made millions from spreading the conspiracy theories and used them as a “marketing scheme,” which led to the families facing “malicious and cruel abuse,” “harassment, death threats,” and “physical confrontation” while they were  already mourning the death of loved ones.

“Alex Jones and InfoWars are not responsible for this tragedy. To punish them for First Amendment protected speech on this matter of public concern will not bring back the lives lost.”

The plaintiffs stated in their complaint that “the First Amendment has never protected demonstrably false, malicious statements” like Jones’.

A hearing has been scheduled for next week to determine whether or not Jones will be deposed.