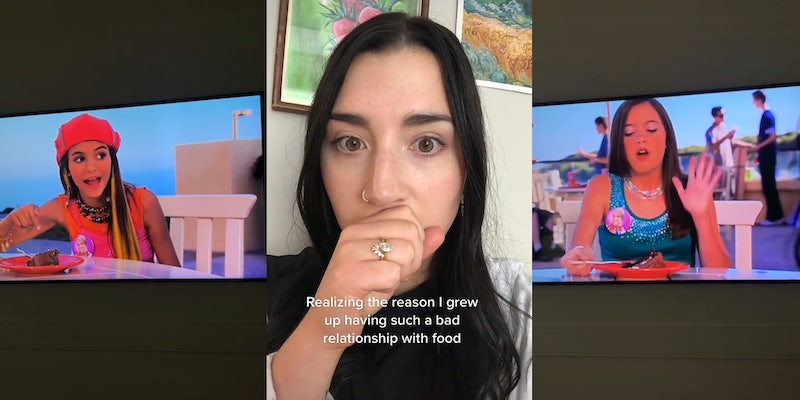 ‘This made me feel like restriction was something girls and women were supposed to do’: TikToker calls out Zoey 101 for pushing diet culture on children

A TikTok went viral for critiquing food shaming and diet culture in children’s media. The video highlights a scene from the late ’00s Nickelodeon show, Zoey 101, where the teenage characters restrict themselves from eating a single slice of chocolate cake.

The clip, posted on June 28 by @mayagarland_, begins with her shaking her head as overlay text that reads, “Realizing the reason I grew up with such a bad relationship with food.” The video shows a scene of the young female characters calling themselves “weak” for wanting a slice of cake and discussing how many calories it contains. The three characters then agree to all have one bite, moan in pleasure, and go back for “one more bite.”

The original video went viral with over 729,800 views, and commenters agreed that this was a perfect example of the toxicity of diet culture.

Maya posted a follow-up video on June 29, which displayed the young male characters also participating in food shaming. She wrote in the text overlay, “This makes me sick.”

UK-based body researcher Nadia Craddock defines diet culture as a “collective set of social expectations “telling us that there’s one way to be and one way to look and one way to eat and that we are a better person, we’re a more worthy person if our bodies are a certain way.’

Many commenters responded to the original video with anecdotes of how the show promoted diet culture in more than one episode, with one user noting, “The first episode chase asks zoey if she wants mac n cheese and she says no, she doesn’t eat carbs. they’re like 12!!”

Another commenter said, “There’s also an episode where a teacher is on a diet and zoey talks about how fattening 1000 Island dressing is. Are the writers ok???”

A third user wrote, “Stuff like this always made me feel like dieting and restriction was not only normal but something girls and women were “[supposed]” to do.”

Others noted how Zoey 101 isn’t the only show or film from this era to promote dieting: “It was that one runway episode in suite life of zack and cody with maddy and london for me.”

“In ice princess when she gets a quarter cup of cheese on her salad and says “It’s Saturday. I can pig out if I want to.” A SALAD WITH CHEESE,” shares another.

The Daily Dot reached out to Maya via TikTok comments and to Nickelodeon via press email for this story but was not met with an immediate reply.