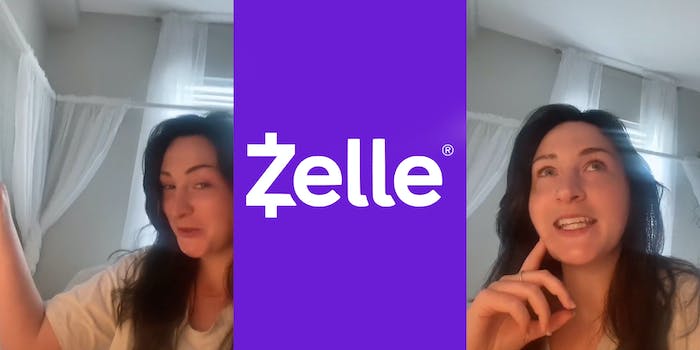 ‘At least eight people have already tried to scam me’: TikToker warns against Zelle scams on Facebook Marketplace

'ZELLE IS NOT THE SCAM. The scam is what they try to do once they get your Zelle.'

In a viral TikTok video, a woman warns other Facebook Marketplace users of rampant Zelle scams on the platform and shares her own experience.

New York-based TikToker Tori (@self.timer.tori) is trying to sell her queen-size bed and canopy bed frame on Facebook Marketplace. However, the majority of responses she’s gotten so far are from scammers using an innovative scheme involving Zelle.

“At least eight people have already tried to scam me in the last two hours,” she claims.

Her video explaining this problem and how the scam works currently has over 817,000 views.

In the video, Tori says that the scam starts out like any normal interaction on Facebook Marketplace, with the scammers frequently using profiles that appear innocent.

After their first messages asking about availability and pickup times, they ask the seller for their email or phone number so they can send the seller money via Zelle.

“No, they don’t [need your email/phone number],” Tori states. “They’re scamming you.”

If one actually gives the scammer their email or phone number, they will send you a message claiming to be from “Zelle support” asking the seller to put in extra money to open a business account.

This is the scam, Tori says. The email is not from Zelle support, and if sent, the money does not go into opening a “Zelle business account,” which does not appear to exist, per Zelle’s website.

While Tori is based in New York, this is a common scam across the United States, with other scammers claiming to use services like CashApp, Venmo, or another similar service.

Recently, the Better Business Bureau of Wisconsin put out a statement warning Facebook Marketplace sellers about scams like these, though they also noted some interesting twists on the scam that are currently making their way through the internet.

In one version, the scammer will send too much money, telling the seller that they can simply refund the excess. Once the seller refunds the “excess,” they come to realize they never received the money in the first place.

In response to complaints about these scams, the Wisconsin BBB listed several guidelines that people should follow to avoid being scammed, including not trusting buyers who are willing to overpay, checking the email address from “Zelle” to ensure it’s coming from the correct domain, and reporting scams to Facebook Marketplace when observed.

On TikTok, Tori and other users quickly noted that Zelle itself was not the problem. However, they also shared that this scam is more pervasive than people might expect.

“ZELLE IS NOT THE SCAM,” Tori commented. “The scam is what they try to do once they get your Zelle.”

“​​This just happened to me,” one user wrote in the comments. “She was like I’m going to send you the money now.”

“Had the same thing happen just this morning,” a further user wrote. In response, Tori claimed several more users tried the same scam on her after making the video.

For those who are concerned about being scammed, TikTokers have some advice: get paid in cash.

“Tips: put first come first served & cash only for your item,” a commenter suggested. “If they ask you to hold it say that 1st comes with cash gets it.”

“Cash is Queen up in here!” a second user agreed. “I don’t do Zelle, Venmo, cash app, or money order.”