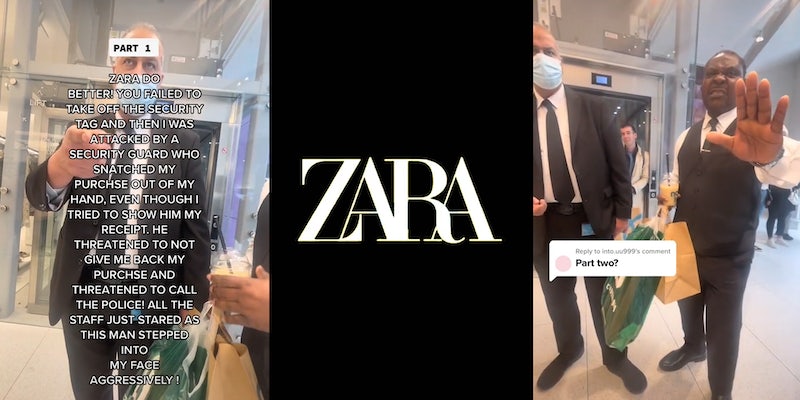 ‘Zara do better’: Black woman says she was racially profiled at Zara

'Always get racially profiled at my local Zara. Proper dread going in there.'

A Black TikToker says she was racially profiled and “attacked” by a security guard at a Zara in London.

Wunmi (@wunmitheartist) posted a video of her interacting with the security guard, who she says attacked her on May 30. The video captures the guard telling her not to record him and her asking other Zara employees to get involved.

In the video’s overlay text, Wunmi wrote that the cashier forgot to take the security tag off an item she purchased and that she was attacked by the security guard “who snatched [her] purchase out of [her] hand.” Wunmi says she tried to show the guard her receipt and that he threatened the call the police on her. In the video, another man asks Wunmi to calm down as she asks the guard for her purchase

“All the staff just stared as this man stepped into my face aggressively,” Wunmi wrote. She captioned her video, which had almost 1.5 million views on Tuesday, with: “Zara do better.”

In a follow-up video, Wunmi tells the man who repeatedly told her to calm down that she is fine. In the comments section of her second TikTok, she says she kept filming because the manager took her item so that she could remove the security tag but that she was still “getting attacked.” She also commented saying that this occurred in the Stratford Westfield mall.

Many commenters tagged Zara’s TikTok account in both of Wunmi’s videos. Others shared experiences they had with security guards allegedly racially profiling them.

“Always get racially profiled at my local Zara,” @litchylisi wrote. “Proper dread going in there.”

“This happened to me in Morrison and he ripped up my grocery shopping AND receipt to get rid of evidence,” @theejoannacharles, who said she felt Wunbi’s pain, commented.

“I’m so sick of security guards thinking they have some massive power,” @rochelle.xc commented. “I work in Primark and a similar thing happened to this other black girl.”

One commenter suggested Wunmi should sue Zara “for personal injury and emotional distress,” to which Wunmi said she plans to file a “first class complaint” about her experiences.