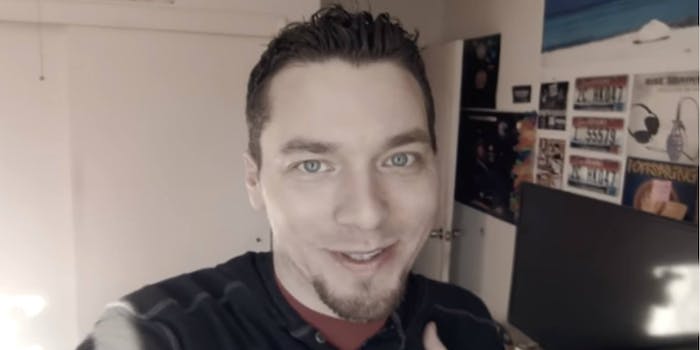 YouTuber Steve Cash, famous for his Talking Kitty Cat channel, has died by suicide at age 40.

Cash will be remembered for his YouTube channel launched in 2007, starring his black cat, Sylvester.

The channel has over 2.44 million subscribers and features video conversations between Cash, Sylvester, and other animals in the house. His most popular video, titled “Bad! Bad! Bad!” has been viewed 17 million times.

Along with his YouTube fame, part of Cash’s legacy will be his courage to share his battle with mental health.

In September of 2019, Cash shared via Facebook that he was bipolar and suffering from depression.

“My bipolar is in a full low swing. I want so badly to finish the videos I’m working on, but depression is making it nearly impossible,” he stated. “It won’t last forever, and eventually, I’ll be just as active as I can be! But for now, I’m kind of stuck with my thoughts. Btw, I rarely ever get online during depressions so this feels like a positive step for me.”

On Friday, Cash’s wife, Celia DeCosta Cash, in a Facebook post—and later on the Sylvester the Talking Cat fan page—announced that her husband was at peace, and his battle with mental health issues was over.

“This is so hard. I’m not even sure what to say, or for that matter, what to do. I just lost my best friend, my sidekick, my lover, my mentor, my absolute everything, this morning,” she wrote. “I’m so sad to say, my husband, Steve Cash took his own life this morning 4/16/2020. It hurts me to share this. Please understand, give the family time to grieve, but know that Steve is no longer in pain.”

On Facebook, fans shared their grief and sent condolences to the Cash family. Many called him “inspirational” and stated his funny videos got them through their own hard times.

“I am heartbroken by this news. I suffer from Bipolar and Steve was a inspiration to me. Reading this just sent a shiver down my spine. I am at a loss for words except my heart goes out to you. You are in my thoughts and prayers. We all felt as though we knew Steve and he will be missed so much. God Bless You,” one fan posted.

On Twitter, more heartbreak flooded in as many mourned the loss of the animal lover. Fans also highlighted the devastation of battling with mental illness.

“Don’t talk to me im fucking sad rn. This man and his videos saved me from my mentally unstable ass. R.I.P Steve Cash,” a fan tweeted.

In honor of Cash, another fan shared resources for those suffering from depression.