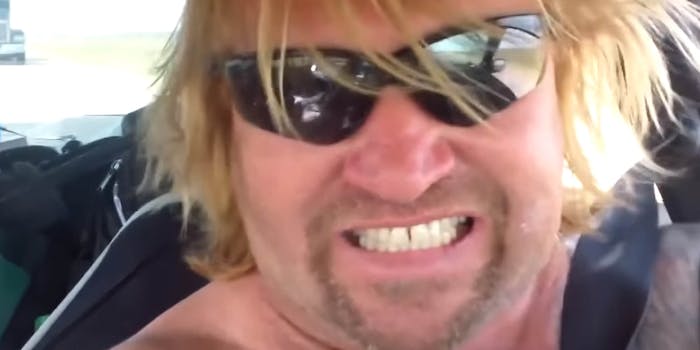 Internet sleuths are connecting his whereabouts with a fatal accident.

Fedsmoker, an internet celebrity known for speaking out against police injustice and lighting his hair on fire, is allegedly dead at 51.

A YouTube user called Fedsmoker Evidence Files claiming to be a “friend” uploaded a video saying Fedsmoker had passed away, asking for viewers to “press F to pay respects” in reference to a meme. The mid-2000s internet forum staple, whose real name is Conald Petersen but has posted content under various pseudonyms, allegedly, according to the Evidence Files video, died in Colorado on Feb. 11.

A thread on a subreddit dedicated to the Your Mom’s House podcast flagged an image on the outdoor sports fan forum River Dave’s Place as potential proof that Petersen died. Redditors noted a few things that seem to line up with Petersen’s latest appearance and whereabouts. The image depicts a body on the side of a road, which the forum poster claims to be Route 95 in Arizona. Pictures show what appears to be Petersen’s car alongside a body that redditors claim to be his, due to visible tattoos on his arm.

A petition to extradite Petersen from Nebraska to Colorado—which alleges he’s a fugitive, and he does have a criminal history—cites him as being in Adams County, Nebraska, though no criminal records were found of him there. But a recent video places Petersen in front of a Walmart in Parker, Arizona, which is 30 minutes away from the accident mentioned in the forum post, according to Google Maps. According to the forum post itself, Petersen was found on Route 95, near Cattail Cove State Park.

An October 2019 upload by another YouTube user, filthy churches, showcases what appears to be Petersen’s vehicle, a blue VTEC with a hood scoop and Under Amour decal. It’s not possible to see the license plates on the car pictured on River Dave’s Place, but the car does have an Under Armour decal identical to the one in filthy churches’ YouTube video.

There are still many unanswered questions. For instance, Petersen’s “friend” in the aforementioned video alleges he died of a heart attack in Colorado, but the car and body were allegedly found dead in Arizona. It’s possible Petersen died while en route, but that raises the question of why he’s laying on the side of the road. Secondly, while we can’t find anything deeper on this subject, a Reddit user alleges that Petersen has faked his death before.

The Daily Dot asked the Arizona Dept. of Public Safety about the incident, and they confirmed that a man died on Route 95 on Sunday, but cannot confirm the identity of the deceased. The coroner in Archuleta County, Colorado did not immediately respond to the Daily Dot’s request for comment.