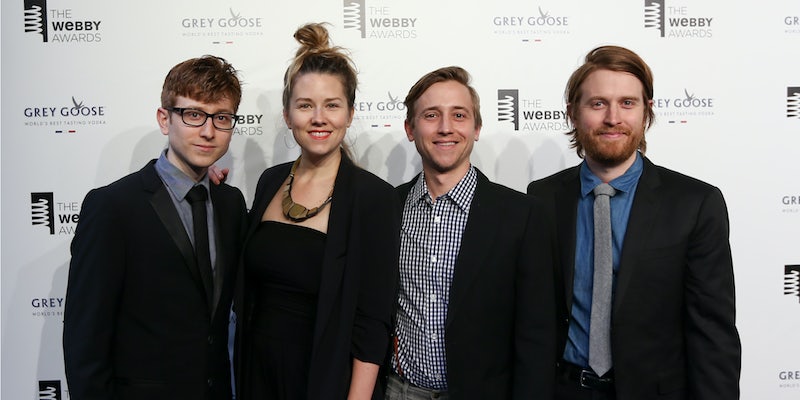 Evan Gregory is a parish leader at Resurrection Williamsburg.

The YouTube creators known as the Gregory Brothers on Saturday addressed allegations of their involvement in an LGBTQ-exclusionary church.

The creators, known for their Songify the News series, were called out after the viral success of their “11,780 Votes” video, which set a President Donald Trump quote to music from Rent, a musical that centers around LGBTQ people dealing with the AIDS epidemic.

Anthony Rapp, who starred in film adaptation of Rent, accused the popular YouTubers of being “involved with a church that has a history of being homophobic” in a tweet on Saturday and asked that they address the issue.

The Brothers’ response confirmed Sarah and Evan Gregory, two of the four siblings behind the channel, are involved in the church and that the church does not allow LGBTQ members.

“All four of us absolutely do not agree with this perspective from a moral or theological perspective,” the statement reads. “Despite Evan and Sarah’s hope that the church would become fully inclusive, it hasn’t done so in a way that reflects their personal viewpoints.”

The Gregory Brothers did not immediately respond to the Daily Dot’s request for comment.

The church at the center of the controversy is Resurrection Williamsburg, part of a New York City-based Presbyterian church network called Resurrection Brooklyn. Evan Gregory is listed as the Williamsburg branch parish leader on the church’s website. Evan and Sarah Gregory can also be seen performing in a recent live stream from the church.

The most notable example of the church’s anti-LGBTQ practices comes from former church member Kristen Scharold, who was kicked out for choosing to marry a woman around 2013. She wrote about her experience in the New York Times and in a Medium post in 2016.

“Despite going to this church every Sunday for five years and serving as a Bible Study leader, Sunday School teacher, and on countless other ministries, I was immediately disqualified from fully participating in the community that had been my home for so long,” Scharold’s Medium post reads. “I was even told to refrain from the Eucharist.”

Scharold also responded to the Gregory Brothers’ statement on Twitter and said everyone who attended the church, including Evan, knew about the situation.

On Sunday, Evan Gregory addressed the issue on Twitter in response to Rapp, writing that he’s seen the church exclude people and pledging to work for more inclusion from “the inside.”

The Gregory Brothers team is behind the viral Animaniacs Storm the Capitol video and is well known for its viral Songify the News video series (previously called Auto-Tune the News) that has garnered hundreds of millions of views.

The “11,780 Votes” video mashed up Trump’s phone call to the Georgia secretary of state with the song “Seasons of Love” from Rent. The video got attention from celebrities including Joseph Gordon-Levitt.

The video has since been made private on YouTube.