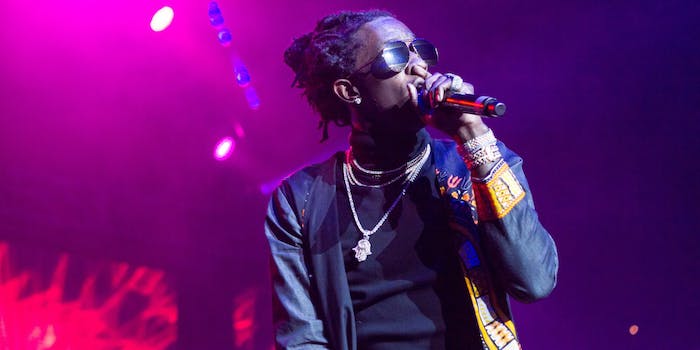 Wade recently addressed his daughter’s announcement that she is transgender on an episode of The Ellen DeGeneres Show.

Wade noted that he and his wife fully support their daughter’s decision to switch to female pronouns. “This is her life every day. This is no game to us,” Wade told Good Morning America. “We’re all about protecting her heart, we’re about protecting her joy and to do that, we have to support her.”

Not everyone agreed with Wade and his wife, Gabrielle Union, supporting Zaya’s decision. In a since-deleted tweet, Young Thug intentionally misgendered the 12-year-old and suggested that she’s going against God. “All I wanna say to dwade son is ‘GOD DONT MAKE MISTAKES’ but hey live your true self,” he wrote. A second tweet said, “You’re gods best Creation.”

The tweet stirred ire among Young Thug’s followers, fans of Wade and Union, and allies of the LGBTQ community. People gathered in the comment sections of his tweets to encourage Young Thug to do some research.

“If your God’s best creation and if someone decides they don’t feel like a man or woman don’t you think God might have spoke to them to change their gender,” one person wrote.

There were, of course, others who supported Young Thug’s transphobic sentiment. “Very well said the first time,” one commenter wrote. “A new respect for you thugger.”

Everyone else satisfied themselves by dragging Young Thug in the comments. “God makes no mistakes but yet he made you,” one commenter wrote.

Amid the vitriol, a few people engaged in genuine arguments about trans rights. “By identifying zaya as ‘son’ instead of ‘daughter or girl’ is disrespectful. But, i’m hoping bc your uneducated is the reasoning behind this tweet,” one commenter said. “I’m really hoping you’re not ignorant as a lot of other ppl if so i can no longer support you as a black gay man.”

Young Thug is not the first celeb to catch heat for comments regarding Zaya’s announcement. On Tuesday, Torrence Hatch Jr.—better known as Boosie Badazz—posted an Instagram video sharing his thoughts. In the video, he claimed that Zaya is too young to identify as transgender and misgendered her multiple times.

The people closest to support Zaya wholeheartedly. Her parents and her older brother Zaire have stood by her from the start. Zaire even posted a heartfelt message for his little sister.

“We did everything together…we fought, we played, we laughed and we cried,” he wrote. “But the one thing we never did was leave each other behind.”