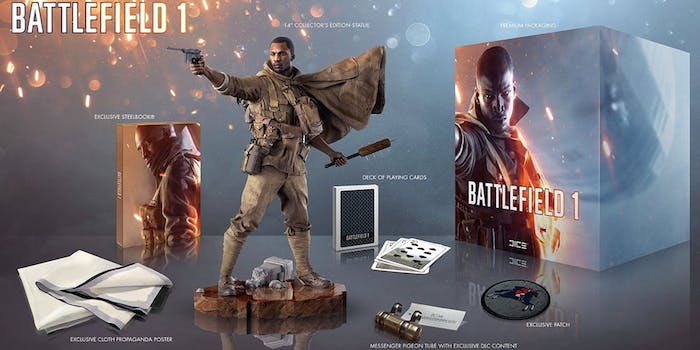 Buy an Xbox One S, get the Battlefield 1 collector’s set free

Your bank account won't get rekt because of this deal.

Gaming is an expensive hobby, but Amazon’s throwing you a bone. From now until Nov. 20, you can get a free Battlefield 1 collector’s edition if you purchase an Xbox One S 1TB console.

This deal is like two bundles in one. The Xbox One S includes 1TB of storage, a digital download of Battlefield 1 Early Enlister Deluxe Edition, and a military green stand and controller. You also get a 4K-compatible HDMI cable and two weeks free Xbox Live Gold trial.

On top of that, you get a collector’s edition that’s chock-full of exclusive Battlefield 1 swag, including limited-edition DLC content packed in a messenger pigeon tube, a 14-inch collector’s statue, a steel book, a cloth poster, a deck of playing cards.  The listing on Amazon is a little confusing because it says “game not included.” However the game is part of the Xbox One bundle, not the collector’s edition swag bundle.