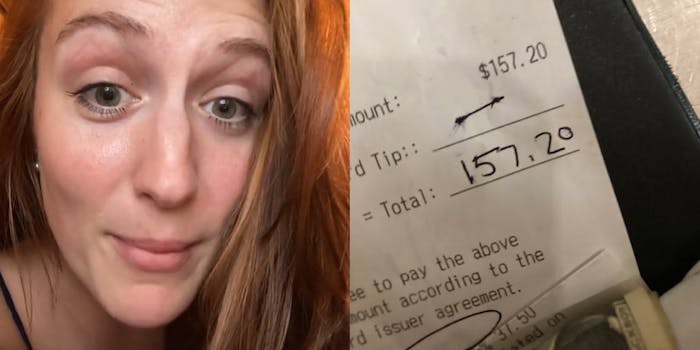 ‘I am a server, not a servant’: Server calls out her ‘worst table ever’ who insisted their daughter be served alcohol with no ID

A TikToker’s series of videos chronicling her ‘worst table ever’ as a server has garnered over 1.5 million views on the platform. In her videos, user @participationawardwife details her experience with a family that insisted on purchasing alcohol for their daughter, who had forgotten her ID.

The first video in the series starts with a photo of this table’s check, including a $157 tab and no tip. When the family in question arrived and @participationawardwife began taking her order, she says the young girl told her she had forgotten her ID at home and that she only had a photo of a passport to use as a form of identification.

“There are two daughters, the older one and the younger one, the younger one says that she wants to order a cocktail, and I’m like, that’s fine, can I just see your ID?” the server says. “She’s like, I don’t have it with me.”

Adhering to laws governing the sale of alcohol and her certification, @participationawardwife says she informed the woman and her parents that she could not serve her alcohol, which made them quite unhappy. After several minutes of back and forth, she claims the woman’s mother ultimately ended up purchasing a beverage for herself, sliding it across the table to her daughter, and telling the server that she would like to order another. Multiple managers ended up getting involved, letting the unhappy customer know she would not be served alcohol.

User @participationawardwife and her managers kept an eye on the table, making it clear that they could not give their daughter alcohol in the restaurant without her ID, or they would be asked to leave. When they received their orders, the family sent things back claiming that their meals were prepared inadequately or that their drinks had been watered down.

The TikToker says the family claimed they would never return to the restaurant and left no tip.

“I knew I was gonna get stiffed because they were just those types of people,” she says. “And you know what? I didn’t care. I just wanted them to get out because they were putting such a cloud over my night. All the time that I’m spending with them, dealing with issues that weren’t issues, there were wonderful tables that I couldn’t give my attention to.”

“I am a server, not a servant,” the server continues. “You don’t speak to anyone like that… I’ve been serving for over 15 years in some capacity. They were probably the most disrespectful table I’ve ever had.”

Commenters criticized the family for being so resistant to following state law and restaurant policies.

“When I turned 21 I triple checked that I had my I.D. every time I went somewhere to eat because I was so scared of being carded and not having it,” another commenter added.

“The amount of times I’ve waited on tables where parents think they can just vouch for their kids being 21 without having an I.D. is astounding,” a third said.

The Daily Dot has reached out to @participationawardwife via comment on the video, as she could not be identified on other social media platforms.