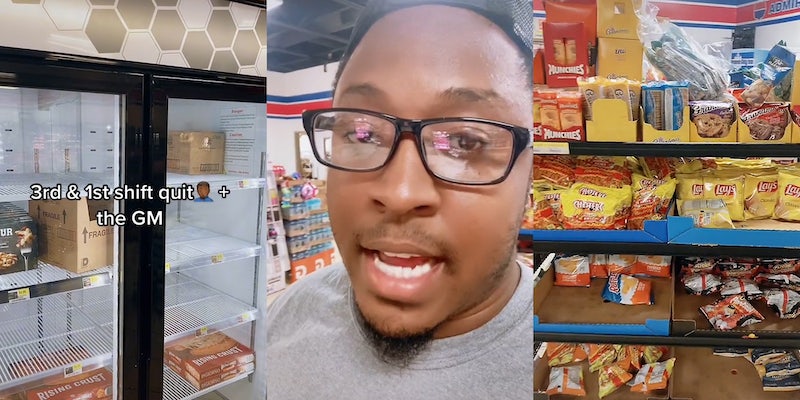 ‘Get a raise, they literally cannot run the store without you’: Worker says everyone including the manager quit at gas station

The worker says they’re willing to take on two shifts but 'can’t do the 24 hours.'

Ever since the “Great Resignation” started, wage stagnation, poor labor practices, and working conditions have been at the forefront of the public conversation. There are clear indicators that workers are no longer willing to put up with subpar terms of employment and are willing to walk away if their needs aren’t met.

Such is the case with this viral TikTok recorded by user @rickeyg2, which shows the TikToker walking through an empty gas station, alleging that everyone except them, including the manager, quit their jobs.

“I work at this gas station, and everybody quit. Look at how empty it is,” they say. As they record the half-empty shelves, they continue: “The manager quit, and I just got word that the first and the third shift quit.” The TikToker then proceeds to say they’re willing to take on two shifts but “can’t do the 24 hours.”

The video, which was posted on July 24 and has over 1.3 million views, sparked a discussion in the comments.

“Bro please get a raise, they literally cannot run the store without you,” one commenter urged.

A survey done by McKinsey showed that over 40% of workers are considering leaving their jobs, and Bonnie Dowling, a co-author of the report, told CNBC the “trend” of workers quitting is here to stay.

“This isn’t just a passing trend, or a pandemic-related change to the labor market,” Dowling said. “There’s been a fundamental shift in workers’ mentality, and their willingness to prioritize other things in their life beyond whatever job they hold.”