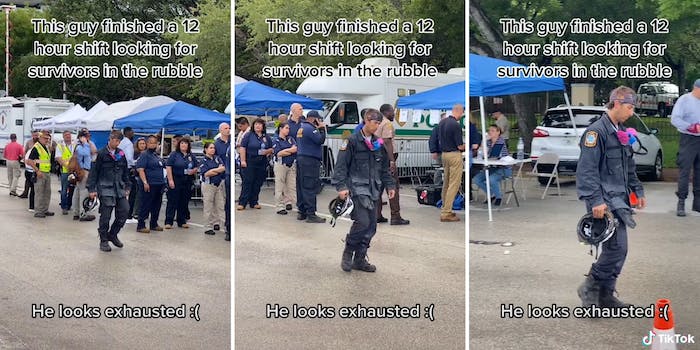 ‘He looks tired as well as defeated’: Video shows ‘exhausted’ worker who allegedly looked for Florida condo survivors for 12 hours

A viral TikTok video shows a worker who is assisting in the search and rescue mission at the partially collapsed Champlain Towers South condominium in Surfside, Florida. Viewers are commenting on how he appears tired and discouraged as he walks away for the day.

Posted by @pichichipixx, the overlay reads, “This guy finished a 12-hour shift looking for survivors in the rubble. He looks exhausted.” The man is in full gear with his helmet off, walking away from the fallen condo site.

The video has been liked over 500,000 times and viewed more than 4.4 million times since being posted on Wednesday.

One one of the top comments notes that “he looks tired as well as defeated.”

“He looks extremely sad,” another said.

In the comments, the man’s wife, @laurennicle119, let viewers know the worker is he “amazingly hardworking husband.”

No survivors have been found in the remains of the 12-story, 136-unit condo. Eighteen people have been confirmed dead, and roughly 145 are still uncounted for, per the New York Times. NPR reports that summer storms have “drastically slowed recovery efforts” and that “crews are forced to stop working whenever the summer storms roll in, which has typically been in the late afternoon.”

Surfside Mayor Charles Burkett relayed that families are frustrated with the decision “to halt the grueling rescue mission because of the inclement weather” and want crews to work through the storms.

“There was frustration. There was a little anger,” Burkett said during a Tuesday per NPR, concerning rescue efforts at Champlain Towers.

It’s reported that one angry family member remarked that first responders “are already risking their lives anyway. They’re working under a building that could fall down. Why do we have to stop for lightning?”

Experts are still reportedly learning more about the building’s collapse, though at least one engineer detailed evidence of “major structural damage” in a 2018 report.