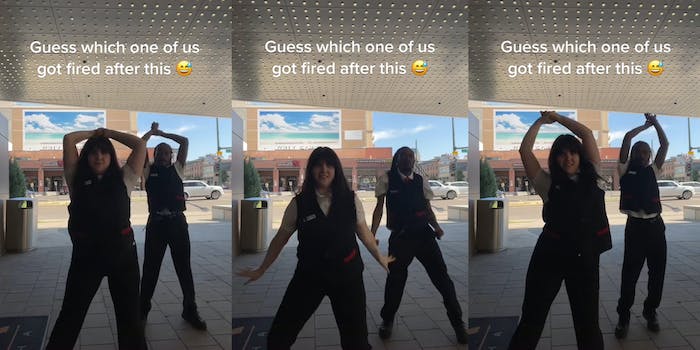 ‘Whoever got fired I hope the other quit right then and there’: Worker films herself and co-worker dancing—one of them got let go

'He could sue for racial discrimination EASILY.'

After a white TikToker posted a video of herself and a Black co-worker dancing, the creator said her co-worker was immediately fired for missing shifts, sparking a debate among commenters.

Faith Riggs (@faithriggs5) posted a video Saturday of herself and her co-worker dancing together during a shift at The Art Hotel in Denver. The text overlay reads, “Guess which one of us got fired after this.”

“I wish this was a joke,” Riggs wrote in the caption. “Saddest day ever.”

The video, which was seen more than 8 million times by Tuesday, led viewers to guess the reason for the employee’s termination.

While many assumed the termination was a result of the workers filming the video, it was not immediately clear whether it was Riggs, a white woman, or her co-worker, a Black man, who was fired. Some commenters speculated the firing was racially motivated or unlawful.

“Girl he could sue for racial discrimination EASILY,” one commenter said.

“Whoever got fired I hope the other quit right then and there,” another person wrote.

In a follow-up video, Riggs and her co-worker, Justin, said the firing was unrelated to the video. While Justin was the one who was initially fired, Riggs said she would also be terminated because she did not show up to a shift.

“It was him that got fired, and they wrote me up yesterday saying if I no call no show, I’m getting fired,” Riggs said. “So guess who no call no showed.”

Riggs said Justin worked a six-hour shift before being told he was being “forced to resign.” She also said the employer told him he would not be able to claim unemployment.

Riggs said they were both terminated for not showing up to assigned shifts without notifying their employer, also known as “no call no show.”

“Rightfully, that’s not a good thing to do,” Riggs said, while Justin added he “owns up to” not showing up to several shifts.

Riggs said when she did not show up to four recent shifts, she was written up by management staff, but Justin was fired after not showing up to two shifts.

Riggs said the hotel’s management staff has a history of discrepancy in discipline against white versus Black employees.

“This shit has happened before, before us, where two people do the same shit, and the white woman does not get fired, and the Black man does,” Riggs said.

Riggs called the situation “weird” because the manager in charge of hiring and termination is also Black.