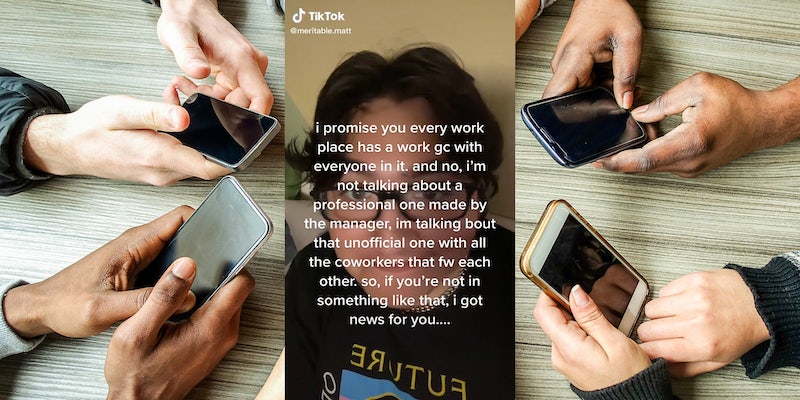 ‘I remember my coworkers had one without me and I literally quit’: TikToker says every workplace has employee group chats, sparking debate about being left out of workplace cliques

'Half of us quit but we still talk in it every day.'

A video a TikToker sharing about being left out in work group chats and inner circles in the workplace has gone viral on the social media platform.

User Matt (@meritable.matt) posted a short clip where the overlay text reads, “I promise you every work place has a [group chat] with everyone in it. And no, I’m not talking about a professional one made by the manager, I’m talking bout that unofficial one with all the coworkers that [fuck with] each other. So, if you’re not in something like that, I got news for you.”

The video featured the viral TikTok audio with someone saying, “Oh, my god. I’m not gonna lie, this is kind of awkward.”

Over the course of a couple of days, the video has been viewed over 404,000 times as of Wednesday. The video resonated with viewers as they shared their experiences with being left out of work cliques.

“fr I [already] know I ain’t in the inner circle or whatever,” one person said.

“My job just has cliques of the different types of people so I’m alone,” a second wrote.

“Yea I already been knew I’m not the one,” a third stated.

“I wasn’t in ours and someone asked if I was going to the plans they made in it and that’s how I found out,” another shared.

Other users had a different reaction, expressing their indifference toward the thought of group work chats.

“I’m sure there’s one out there, but I remember I’m a minor so I don’t trip about it,” one person said.

“[I don’t really give a fuck] I’m only there for the summer lmfao,” a second wrote.

“I dont like a couple of my co workers so I could care less lol,” a third commented.

“I can’t stand any of my co-workers so good,” another viewer concurred.

Unfortunately, cliques don’t stop after high school. According to Forbes, 43% of workplaces are filled with them. This isn’t surprising since humans tend to be social creatures of habit and carry this cliquey behavior into adulthood. A survey showed that 13% of people claimed that workplace cliques have a negative impact on their job and 11% feel intimidated by these groups.