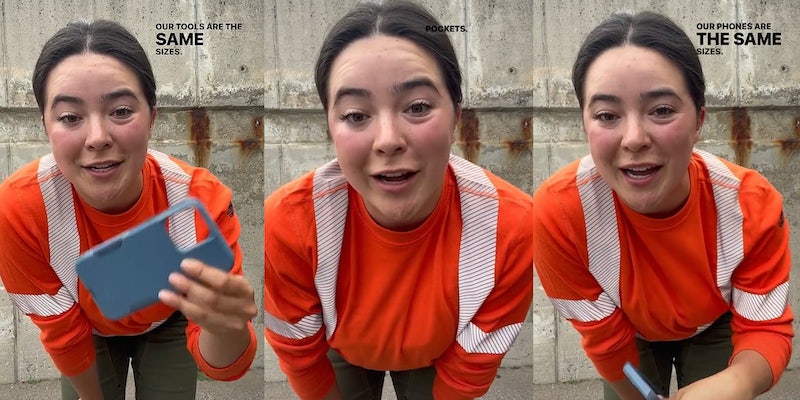 'All these men saying 'buy one with bigger pockets' probably have never seen women's clothes.'

A construction worker is calling out companies that claim to make workwear for women but then leave out a few important details that are present in men’s clothing—specifically, pockets.

In a now-viral video, user @technically.a.tech shows off a pair of pants made by a brand that makes “workwear specifically for women.” Her TikTok is in response to another TikToker’s video asking women in male-dominated fields to share their daily reminders that things aren’t quite made for them.

“Which is why I was particularly ticked off when I couldn’t even fit my phone into my front pocket properly,” she says in the video. She then demonstrates with a phone case, which sits uncomfortably and unevenly in the shallow pocket and prevents her from bending over.

The video currently has one million views.

In the comments, users were largely in agreement with the TikToker.

“Literally do they think we carry a purse on a job site ?” another asked. “Literal safety hazard if we did.”

“All these men saying ‘buy one with bigger pockets’ probably have never seen women’s clothes,” a third speculated.

The “men” referenced in the last statement refers to the many people who commented that women should simply buy men’s pants, or buy pants that may not be as aesthetically pleasing while still being practical.

“The only reason is that women buy them to look good. While men buy them for practicality. nothing stops you from buying men’s clothes,” a user wrote.

While many were quick to remind this user that the TikToker was, in fact, buying a practical garment (workwear), the creator made a response video and similar comments, highlighting the issues with such ideas.

“I’m not wearing it for fashion. I’m buying so that I can work properly and comfortably,” she says in the video. “I can’t just buy men’s workwear. It doesn’t fit right.”

Commenters noted that workwear that does not fit properly can pose major risks on the job site.

“Having my safety vest snag every time I go on-site because it’s twice the size of me,” a user complained.

“Have seen how poorly a lot of male tailored firefighter gear fits a lot of women,” a second stated. “It’s a safety issue.”

“I took a welding class in HS, and ran into SO many unsafe issues bc all the safety attire was sized for GROWN men,” a user recalled. “Almost welded over my finger bc…I couldn’t feel where the ends of my huge gloves were. Easily 2 inches too long in the fingers. Jacket sleeves reached my knuckles.”

The TikToker later demonstrated this very phenomenon in a video.

“Some dudes are really out here thinking they’ve found a solution we haven’t thought of,” she wrote in the comments.

“Women in construction, trades, and STEM have always had an incredibly difficult time finding gear that fits them properly while they work,” she wrote. “Proper fit is first and foremost an issue of safety, so I’m really happy to see how many people & companies are starting to pay attention!”