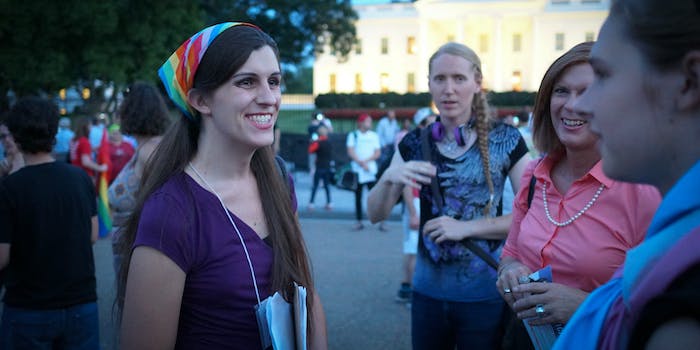 A year after Trump’s win, more women are running for political office than ever before

Trump and his policies sparked a revolution he probably wasn't expecting.

If 2016 was Trump’s year—in which he won the presidential election despite saying he grabs women “by the pussy”—then 2017 might just be the year that women grab back politically. According to a report from Rutgers University’s Center for American Women and Politics (CAWP), more women are on 2017’s Election Day ballots than in previous years.

On Tuesday, New Jersey is hosting a general election for the state’s Senate and General Assembly, while Virginia is holding a House of Delegates election. All three legislative bodies have their seats up for grabs, meaning 220 positions in total will be decided by the election. And among those 220 seats, 129 candidates, representing the Republican and Democratic parties, are women.

Spent tonight w/ these 30 incredible women running 4 office in my home state of NJ. Election is Nov 7th. List of women is on my Facebook. pic.twitter.com/NCy5FNTrVG

Rutgers reports that Virginia’s House of Delegates has seen a 60 percent increase in women candidates running for the House compared to the 2013 and 2009 elections, with 51 women on the current ballot. That increase is mostly attributed to Democratic women facing off against incumbents—in total, 26 women running are freshmen candidates.

Virginia isn’t an outlier, either. In New Jersey, 53 women between the two major parties are running for a position on the assembly, and 25 are shooting for the Senate. And while the New Jersey Assembly hasn’t seen an increase in female candidates, the Senate’s ballot numbers shot up, with 25 women running in 2017 compared to just 15 in 2013.

New Jersey and Virginia’s legislative races aren’t the only two elections with an increase in women running this November. Ballot listings from both CAWP and Ballotpedia reveal 143 women are campaigning for office, including Utah Democrat Kathryn Allen, who’s running for Congress, and Republican Kim Guadagno who’s running for governor of New Jersey.

That’s a significant increase, especially for an off-year election. Jumping back four years ago, CAWP’s 2013 statistics on New Jersey’s elections, Virginia’s House of Delegates election, and Massachusetts’ special election reveal that only 102 women ran for statewide and nationwide elections. Something happened between 2013 and 2017 that caused nearly a 30 percent increase in women running for office—and looking at the sheer number of Democrats in this year’s race, that something was most likely Trump.

In the 10 months that Trump has been in office, the administration has made strides in restricting access to women’s birth control, abortion, and healthcare. It seems women across the nation don’t want men making decisions over their bodies; they want to speak for themselves in politics.

“It’s unprecedented,” Virginia Democratic Caucus Chair Charniele Herring told CNN. “I think this is just the start. The charge for us is to keep this up. This is just the beginning, but I do believe we’ll see legislatures across the country look different and more representative.”

We’ll have to wait to see how many women will succeed in being elected to office in the next three years. However, whether they win or lose, the high number of female candidates after a devastating presidential loss proves that women won’t just cower in defeat. Women aren’t just going away.