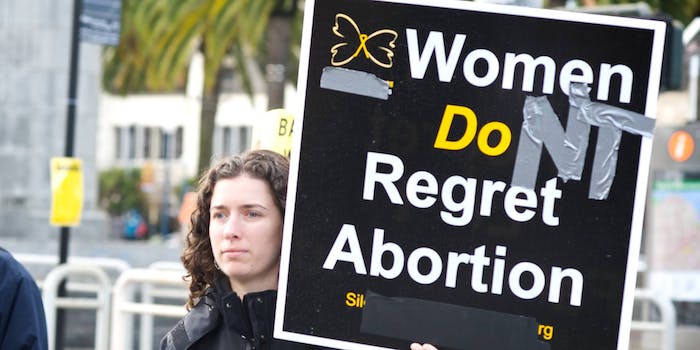 Three days after women marched around the world in support of reproductive rights, the House passed a bill that would ban women from receiving any federal assistance for abortions—whether it’s through Medicaid or bought with private insurance on the Affordable Care Act exchange.

H.R. 7, or the No Taxpayer Funding for Abortion and Abortion Insurance Full Disclosure Act of 2017, would make permanent the Hyde Amendment. It’s a budget rider that prevents federal funds from being used to pay for abortion, except for women who’ve been raped or whose health is endangered by their pregnancy. The rider, which Hillary Clinton hoped to abolish, has been tacked onto other legislation and re-upped every year for 40 years.

In other words, taxpayers have never funded abortions.

But with H.R. 7, the House also wants to make sure that women can’t get private coverage for abortion, either—paid for out of their own or their employers’ pockets and bought on the ACA exchange. Under H.R. 7, if women still choose to buy an insurance plan covering abortion through the ACA exchanges, they won’t receive government subsidies.

This disproportionately affects federal government employees, military women stationed overseas, and women in the Peace Corps, as well as low-income women, women of color, and young women who rely on Medicaid and ACA for healthcare—and nearly half of all abortion patients live below the poverty line; another 26 percent are low-income. About 7 million women on Medicaid are of reproductive age, according to the Guttmacher Institute.

“A woman’s access to abortion should not depend on where she lives or how much money she has,” said Vicki Saporta, president and CEO of the National Abortion Federation, in a statement emailed to the Daily Dot. “And the House and its leadership should not interfere with personal medical decisions in order to advance their own ideological agenda, which most Americans do not support.”

Just yesterday, President Donald Trump, surrounded by an office of men, reinstated the “global gag rule,” which blocks federal funding for any international non-governmental organization that provides abortion or mentions abortion as an option for reproductive health.

This group just made it more difficult for women to get access to health care worldwide. You tell me what’s wrong with this picture. pic.twitter.com/8UQFWg8qO3

H.R. 7 will next head to the Senate for a vote.