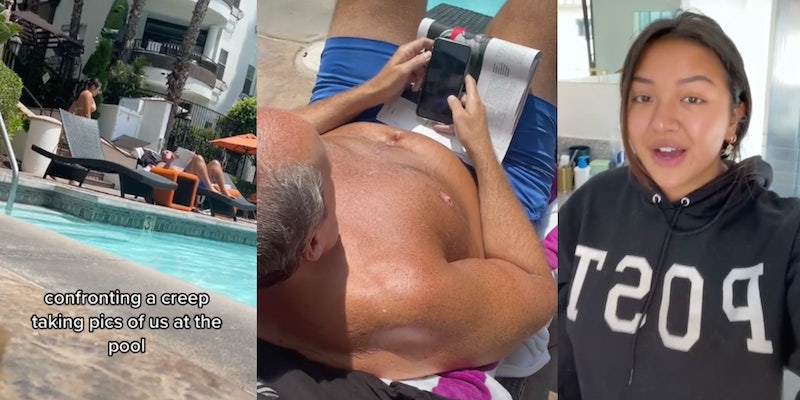 ‘He was shaking’: Women confront ‘creep’ who took photos of them at the pool

Viewers are commenting on the man's demeanor in the video, with one saying he looks 'so scared.'

A viral TikTok video shows a group of women confronting a man they caught taking photos of them while they were laying out by a pool.

TikToker @maiphammy and her friends said they noticed the man taking photos of them on his phone. They decided to confront the man and demand he delete the pictures.

The video featuring the confrontation has garnered over 5 million views since being posted by @maiphammy, an influencer with over 550,000 followers. The caption reads: “Stay safe out there, ladies. Decided to confront a creep taking pics of us when we were just trying to hang by the pool. HE TRIED DENYING IT.”

“Excuse me, I’d really appreciate if you deleted the photos of us off your phone,” one of the women can be heard saying in the TikTok. A portion of the video features a voice recording of the confrontation; a portion features a video of it.

The man denies he took photos of the girls. But then, after they repeatedly demand he scroll through his camera roll, they locate pictures.

“Can you please delete them?” they ask him, to which he replies: “Yes ma’am.”

He says he feels “intimidated” because the girls are hovering over him, but they tell him they are hovering because they want to make sure he deletes the photos—from both his camera roll and his “recently deleted” album.

“Oh my God, I just saw a video of me, sir,” one of the women says, before asking him to “delete that.”

The video then ends.

Some viewers are commenting on the man’s demeanor in the video, with one saying, “Sir is TREMBLING.”

“He’s probably scared because he has a lot of pictures from other girls as well,” another said.

Others are lauding the women’s bravery.

“So proud of you for standing up for yourselves,” one wrote.

The Daily Dot has reached out to @maiphammy for comment.