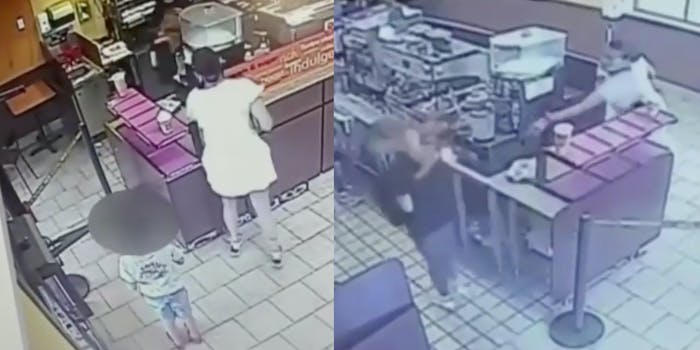 The worker isn't sure she wants to return to the job.

Police in Massachusetts are reportedly looking for a woman who was caught on camera throwing an iced coffee at a teen worker’s head.

The 18-year-old shift manager at the Dunkin’ location, Emma Dionne, told WHDH that the customer was apparently upset that one of the several drinks she ordered didn’t have whipped cream on it.

“I was like ‘Oh I’m sorry, let me put whipped cream on this for you,’” Dionne recalled saying to the woman. “She just starts cussing and says how we shouldn’t be working here because of how rude we were.”

In the security footage of the incident, published by WHDH, the woman can be seen throwing a cup of iced coffee at Dionne’s head after the 18-year-old turned away from her. Dionne said she felt it hit “the back of (her) ponytail.”

Dionne told CBS Boston that she didn’t realize what fully transpired until she “saw the coffee all over the floor, all over the counter” and viewed the security footage.

“Just to see her like physically grab the cup and aim for my head was very, very scary to watch,” Dionne told CBS Boston.

Dionne said she may not return to work due to the incident and is hoping that the woman will no longer be allowed at the location once police are able to locate her.

The Daily Dot has reached out to the Woburn Police Department.