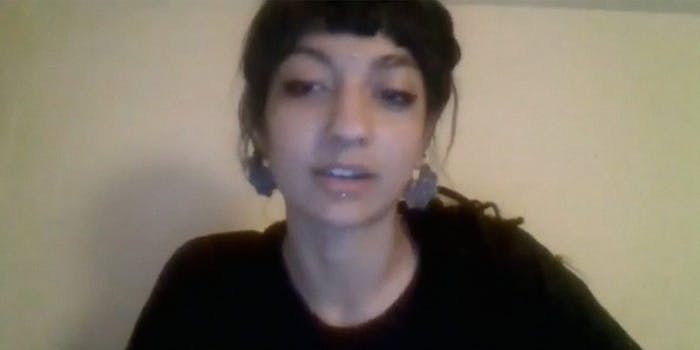 Screengrab via The Guardian

When the English Defence League (EDL), a far-right group that wants end the spread of Islam in the United Kingdom, held a protest in Birmingham on Saturday, one woman showed up to protect Muslims from getting attacked.

The woman, Saffiyah Khan, told BuzzFeed News, “I ended up going to the EDL demo because there is a history of harassment and assault of Muslims, vulnerable members of the public, and people of color at the demos and outside of it.”

Khan said she was laying low at the rally until she saw a woman in a headscarf surrounded by about 25 EDL members. She came quickly to the woman’s defense, only for an EDL leader to put a finger in Khan’s face and for the EDL group to circle her instead.

Khan kept her cool, though. “I didn’t feel threatened in the slightest way,” she said.

That moment of not feeling intimidated by her oppressors was captured in a now-viral photo by Press Association photographer Joe Giddens. As one Twitter user put it, the image is also the complete embodiment of “U Mad?”

her name is saffiyah khan. iconic embodiment of both young modern britain and the entire concept of "u mad?" pic.twitter.com/xApkobsltb

Who looks like they have power here, the real Brummy on the left or the EDL who migrated for the day to our city and failed to assimilate pic.twitter.com/bu96ALQsOL