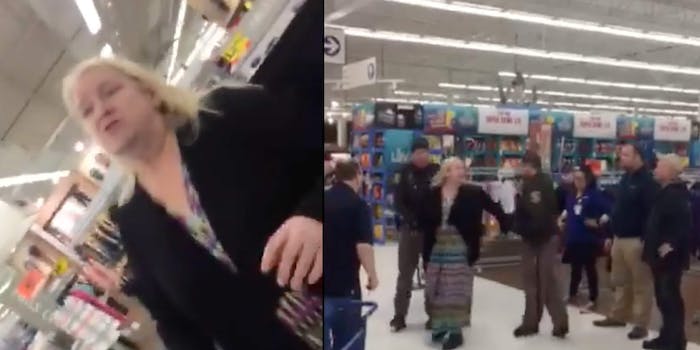 'Imagine if this was a veiled Muslim woman.'

A video has gone viral on Facebook showing a white woman screaming at random strangers at a grocery store, angry at them for not “repenting” for Jesus.

The video, posted by David Distelrath on Saturday, has received about three million views and garnered thousands of comments. It took place at a Meijer supermarket in Michigan, according to his Facebook check-in.

“Hands down best meijer experience ever,” Distelrath wrote in the caption of the video.

The man behind the camera asked her to leave him alone and said he was just trying to get his groceries, which enraged the woman.

“F*ck you. I’m trying to help you motherf*cker,” she said.

The man began to laugh off the situation.

“You gotta ask Jesus Christ. We’re all sinners,” she said and then continued to scream at the man.

At this point, a store clerk intervened.

“I’m pissed because he won’t repent,” the woman said.

As the clerk explained that this was not acceptable behavior, the woman continued screaming and warning that they would all “burn in hell.”

After the situation continued to escalate, another store employee intervened and warned her that the store would call the police. The saga carried on for a few more minutes until security escorted her out.

Social media activist and Twitter user @_SJPeace_ who often shares videos of hate speech also posted the video. There are many responses to the video on Twitter, and the most common one blames mental illness for her behavior.

“This is exactly why more money has to be given to support mental health services,” Twitter user @Lynda_Welch wrote.

This is exactly why more money has to be given to support mental health services!!

She has tardive dyskinesia, which is a side effect of heavy duty psychotropic drugs. 50 years ago she would have been in psych hospital probably for life, with day passes to go out w/family, but we got rid of the state psych system because it was the dreaded SOCIALIZED MEDICINE.

But many pointed out that the excuse of “mental health issues” is a privilege not afforded to Black and brown people. Last year, a man tried to attribute his racism to Autism, triggering a conversation on the intersection of racism and disability.

Moreover, these kinds of excuses are allowed specifically to white people. People of color, as many pointed out, would be immediately criminalized if they were seen behaving like this.

“Now imagine if this was a veiled Muslim woman. She would be investigated for terrorism and incarcerated indefinitely,” @_SJPeace_ wrote.

She’s being diagnosed here on Twitter as being mentally ill. If she were Black or Brown I’d dare say ppl would ask why wasn’t she arrested for her behavior? This is what the tRump Cult/base looks like, and some of them have guns.

But I bet she won’t get shot down like a dog when the police come..

Other people pointed out that such excuses also further stigmatize mental health.

Y'all, I get wanting to be pitying/compassionate/whatever towards people like this, but please don't bring mental illness into this conversation. Nearly half of all Americans experience mental illness throughout their lifetime, and the vast majority of us aren't like this.

Anyone else getting tired of treating these people with kid gloves? She has a mental illness but gawd damn do we need to continue to tolerate this? We need programs to get them off the streets and into a facility