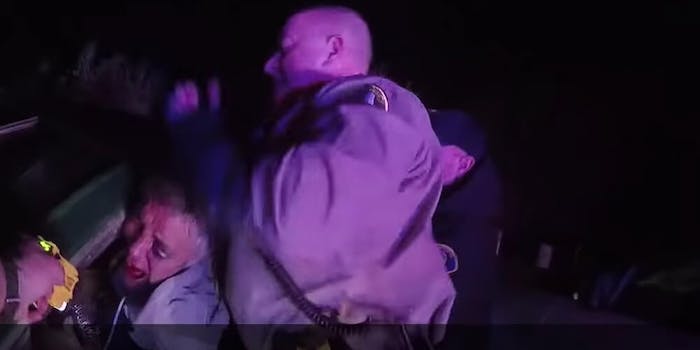 One of the officers involved was fired.

Newly released footage shows the moment California police officers slammed a man’s head into his own vehicle, tased him, and put him into a sleeper hold. The man later died, and now his attorney wants answers.

The Sonoma County Sheriff’s Office released a debriefing video detailing the events that led to the forceful interaction.

In the video, County Sheriff Mark Essick explains that the victim, David Glen Ward, 52, was driving his green Honda Civic when the police tried to pull him over. Ward had earlier reported the vehicle stolen and had not contacted police to let them know that he had regained possession of it. He refused to pull over, leading the cops on a five-mile chase. Ward was forced to stop his car after police used a “pit maneuver,” hitting a vehicle from behind to force the driver to lose control of it.

Body camera footage shows Deputy Charlie Blount, who was the lead officer in the arrest, drawing his gun on Ward, who was sitting in his vehicle. Blount only arrived on the scene after the chase ended.

“Don’t move,” one of the officers screams. “Get your hands up.”

The officers then instruct Ward to open his car door with one hand. Instead, he winds down his window, pleading with the officer.

“I can’t believe this. I’m the injured party in this,” he says.

Eventually, Blount reaches into the car to try to drag Ward out through the window. Another officer tases him. As the officers try to pull him out of the window, they realize Ward’s legs are pinned under his steering wheel, but they continue to pull.

Blount can be heard saying that Ward bit him. Blount then punches Ward multiple times in the head and then slams his head repeatedly against the car door frame. He also puts Ward in a carotid restraint, which puts pressure on the carotid artery. By the time Ward is removed from the driver’s seat of his car, he is unconscious and in need of medical attention.

In the debriefing video, Essick expressed serious concern over Blount’s actions and explains that he will be fired.

“The way Deputy Blount handles the entire situation is extremely troubling,” he says in the video released by the county. “As a result, I have served Deputy Blount a notice of termination.”

“Frankly, Mr. Ward caused his own death by inexplicably taking a number of bizarre actions that confirmed in the deputies’ minds that he was an armed car-jacker, rather than the victim of that crime,” Stern said in a statement to BuzzFeed News.