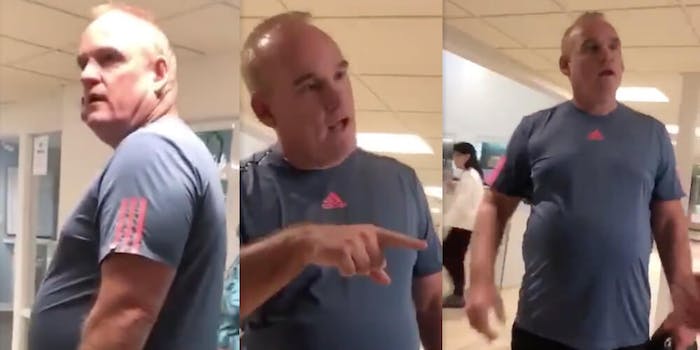 'How can you say something like that? Aren’t you human?'

Martin Hyde, a Florida politician running for the Sarasota City Commission, is under fire after a video surfaced of a heated exchange between himself and a 15-year-old boy who claims he made a racist remark and later offered money to delete the footage.

The unidentified teen was invited to participate in the Casely International Championship at the Bath & Racquet Fitness Club, where he was approached by Hyde and allegedly berated with racist comments. According to the boy’s uncle, Javier Irizarry, the teen was speaking to his teammate about a strategy for their match when Hyde approached the pair and told them to “shut up.”

“You shouldn’t be playing tennis, you should be cutting the grass,” Irizarry alleges Hyde added.

That’s when the teen decided to take out his phone and start recording.

In the video, posted to Twitter by attorney Alvin Couto de Jesús, the unidentified boy can be heard pleading with the politician and accusing him of racism.

“You’re telling me to cut grass because I’m Hispanic,” he says to Hyde. “That’s racism, man. How can you say something like that? Aren’t you human?”

Hyde responds to the boy by saying, “Yes, so what?”

Hyde also insinuates the boys are drug users and bragged that he knows the city’s sheriff when the teen tried to report him to the club.

“Look at these agitated … I don’t know what drugs they’re on,” Hyde says to the staff, trying to discredit the teens.

Irizarry claims the Florida Republican–who ran unsuccessfully for a City Commission seat in 2017–tried to offer the boys’ coach money in exchange for the video. Irizarry also raised concerns over the club’s choice not to intervene on the boys’ behalf.

“It seems the staff knew who he was and were intimidated,” Irizarry told the Daily Dot. “They didn’t do anything to protect the minors.”

However, Latino Rebels reported that Hyde was notified by Bath & Racquet Fitness Club management that he was permanently removed from being a member of the club.

“I am super disturbed at seeing that video,” Michael Brandon, the club’s manager told the publication via voicemail. “Bath and Racquet definitely or any of the staff here does not stand for racism whatsoever or any type of actions like that at all, especially towards children.”

This is not the first time Hyde stands accused of racism. Back in February, two Hispanic construction managers alleged  Hyde yelled, “Tell your fucking Mexicans to turn off their Spanish music,” according to a police report unearthed by the Sarasota-Herald Tribune.

The Daily Dot reached out to Hyde who refused to comment.