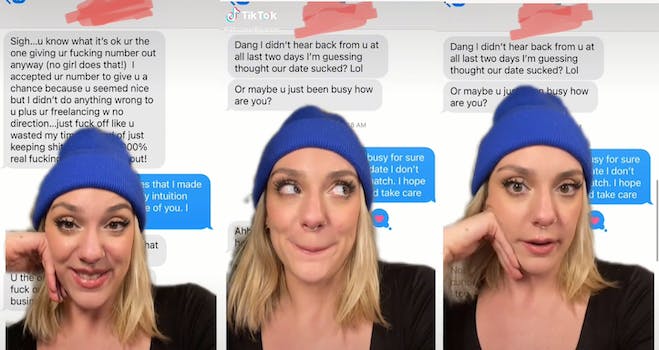 ‘You’re freelancing w no direction’: Woman exposes man who berated her 10 minutes after she didn’t respond in viral TikTok

In the dating world, anything can happen. You never know if your date is going to end up as the love of your life or some angry dude who will try to FaceTime you out of the blue and blow up after you don’t respond to a text.

For Amelia Jackie, her date turned out to be the latter. The TikToker (@itsameliyaaas) exposed her terrible date in a viral video, which prompted a conversation about the unrealistic expectations many men have for their female dates.

Jackie said in a TikTok that the date happened about two months ago, but she just recently decided that she “must” share it. Based on her facial expressions and tone in the video, she’s still shocked by her date. As of publication, her TikTok has received more than 172,000 views since going live this month.

Jackie reportedly met the man, named Aaron, at a taco truck and decided to give him her phone number after he gave her his card. The two had mutually flirted during their conversation, she said.

“I was honestly experiencing mania and just felt really hot and like I needed to give a stranger my phone number,” the TikToker said. “Last time that I’m doing that.”

The two ended up going on a date, but it felt “bizarre” and “super weird” to Jackie. She didn’t say what the date was, but she said it was “not it” for her.

After the date, Aaron tried to FaceTime Jackie randomly, which made her uncomfortable. She didn’t pick up.

Eventually, Jackie got a text message from Aaron, although she didn’t say how close the message was to the FaceTime request.

Basically, Aaron asked why he hadn’t heard from Jackie in the last two days, guessing that their date must have “sucked.” Another message asked if she had just been busy and how she was doing.

Jackie’s text response said, “Hey Aaron. Been busy for sure but also after our date I don’t think it is a good match. I hope you understand and take care.”

Aaron texted back thanking Jackie for her honesty. A few minutes later, he asked what he did wrong — “Was I too weird or was it my age?” He said he wanted to know for the next date that he went on, which Jackie said was “all normal.”

But after 10 minutes of waiting for a response, Aaron’s attitude changed. Jackie said she wasn’t able to respond immediately because she was working.

In a long text message, Aaron wrote, “Sigh… u know what it’s ok ur the one giving ur fucking number out anyway (no girl does that!) I accepted your number to give you a chance bc you seemed nice but I didn’t do anything wrong to u plus you’re freelancing w no direction… just fuck off like u wasted my time instead of just keeping shit All the way 1000% real fucking trash bitch I’m out!”

“10 minutes I didn’t respond, and this man’s ego was so hurt,” Jackie gasped in the video.

In a text response to Aaron’s lengthy message, she wrote, “Wow lol that solidifies that I made the right decision. My intuition picked up on this side of you. I hope you heal.”

Aaron didn’t seem to like that answer. In an arguably even more fragile response, he snapped, “No u wasted my time like that shit is annoying.” He claimed in another message that that Jackie had come up to him out of nowhere when he hadn’t said anything to her.

So Jackie simply told him “I’m not responsible for your expectations.” She laughed in the video as she read Aaron’s response: “That’s annoying.”

Jackie’s last response to Aaron was “I wanted to get to know you and that’s it.”

This set off a series of angry texts from Aaron in which he claimed that Jackie approached him with “bad intentions,” texted him first (which isn’t true by Jackie’s account), and got “high and fucking mighty” afterward.

After that whirlwind of emotions, Jackie finally blocked the man.

“I was like determined to have a Sex and the City moment, and this is how it ended for me,” she said, still laughing in her video.

TikTok viewers were as shocked as Jackie surely was after the date, and several pointed out the red flags Aaron’s messages showed.

“Any guy who thinks women ‘don’t give out their numbers’ as a grown adult is a red flag. Like… tell us you make women uncomfy without telling us….” one viewer commented on Jackie’s video.

Several viewers pointed out the initial FaceTime request, which they said should have warned Jackie from the beginning. Jackie admitted in responses to such comments that she should have known and trusted her gut.

“I agree if they ever try to face time without prompt it’s a huge red flag,” one viewer said.

One viewer said men like Aaron make dating difficult, commenting, “It’s interactions like this that make dating so exhausting for women. We literally have to hype ourselves up for potential emotional abuse.”

In response to the comment, Jackie wrote, “Literally we fear for our lives any time we go on a date.”