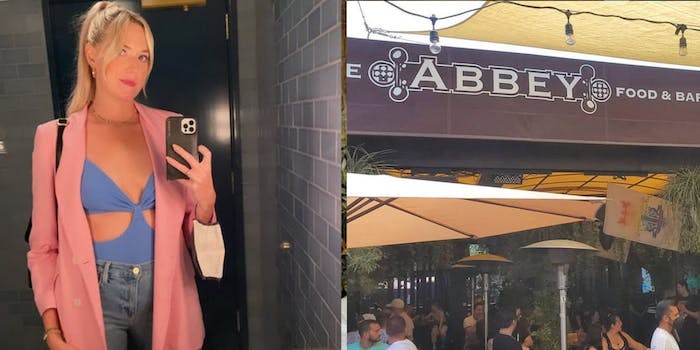 Woman says she was drugged at popular gay bar, prompting others to share similar experiences across social media (updated)

These are not the first allegations made against The Abbey.

A woman on Instagram recently shared her experience allegedly getting drugged at The Abbey, a popular gay bar in Los Angeles.

Haely White, a self-described comedy creator, writer, and director, said she wanted to share her experience in an effort to protect her community.

On July 29, White says she was severely drugged, or “roofied,” by a bartender at The Abbey. Within 15 minutes of arriving at the bar and drinking only half of her drink, she collapsed and vomited. She says she continued vomiting until she got home.

White says she barely even made it inside her home and claims she got bruises on her face, including a black eye, while trying to do so. She says she lost control of her body and fell on her face. When she woke up the next morning, she had a busted nose, lip, and black eye.

“I’m happy I’m alive to share this,” White wrote on Instagram. “If you know me, you understand this would never happen to me. Not a huge drinker, plus I never vomit when drinking.”

White added that she didn’t let her drink out of her hands once and felt fine before sipping said drink.

According to White, her friend was with her and able to help ensure she wasn’t harmed more. But she says she had to share this story because she fears for “the person who doesn’t have someone there.”

Her post was met with an outpouring of support, with hundreds of followers thanking her for speaking up and issuing condolences that she had to go through such an experience.

White warned her followers about gamma-hydroxybutyrate or GHB, a clear, odorless liquid that no one would notice in their drink. Commonly known as a date rape drug, GHB causes side effects that mimic alcohol but more intensely.

White also alleged that incidents similar to hers have been happening for years at The Abbey, saying it doesn’t take more than a Google search to see the truth. She compiled several of those incidents in her Instagram post and called for her followers to join her in boycotting the bar.

Once aware of the allegations, bar management claims they reached out to White immediately and asked her to file a police report. The bar also asked her their own questions so they could start their own internal investigation.

The bar claims it can find no evidence that any staff member spiked White’s drink but says it shared security camera footage with the police.

“If we had any evidence that one of our employees or staff had drugged someone, we would terminate them immediately and work with law enforcement to prosecute them,” the bar stated in the post. “We want people to have a good time and we want people to be safe. We also want our guests to be aware of their choices, their surroundings, and their limits.”

Some folks felt that The Abbey’s statement was victim blaming and minimizing of White’s experience.

“‘We want our guests to be aware of their choices, their surroundings, and their limits.’ Ok [The Abbey] this sounds a little like you’re making it the guests fault. Am I wrong?” one commenter under the statement said. The Abbey has limited comments on the post.

In a separate Instagram post, White clarified that she doesn’t believe in cancel culture but believes it is everyone’s duty to speak out against abuse.

She said she was shocked by the number of other people who came forward and shared their own similar experiences with her after her original post.

“I now realize why victims of GHB and similar experiences don’t speak out and why this could go on so long: we don’t control the narrative,” White wrote. “When you’re drugged like this, you have complete amnesia. You’re so confused, and usually because of that, you don’t know who did it or what happened. We lock in that embarrassment like it was our own fault and in that shame, we keep quiet.”

She encouraged others who had experienced similar incidents to share their own stories and speak out against abuse. She set up a Google Form for others to share their stories.

White’s post made its way onto TikTok, where one woman shared a similar loss of bodily function after a night at The Abbey.

“Me wondering why I started projectile vomiting, couldn’t control my body, and was shaking 30 mins after my 2nd drink at The Abbey,” she wrote on top of the video.

More people shared their experiences in the comments of the TikTok.

As White pointed out in her original post, these are not the first allegations made against The Abbey. In 2013, three employees of the bar were sued for allegedly drugging and raping two female customers, according to NBC Los Angeles.

Update 12:30 pm CT Aug. 8: White told the Daily Dot that her post was not about her, rather it was about the response and other victims that came forward in light of her story. She declined to comment further, citing current investigation into the matter.

A representative for The Abbey said that the bar had nothing to add to its social media statement.