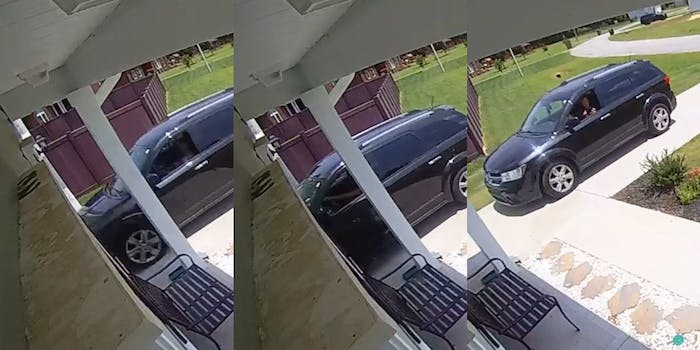 A video trending on Reddit shows home security footage of a woman ramming her car into her ex’s new house in a rage.

The video was posted to Reddit’s popular r/PublicFreakout page by uMagnanimousKruppe. The caption reads: “My friend just bought his first house, gained custody of his daughter, and is doing really well. His crazy ex decided she had to do something about that.”

The circumstances are purely speculative, but the video may land the woman in some trouble with the law.

“Some people just hate others doing well, hope she was arrested for this,” a redditor wrote.

The footage from the ADT security camera shows a woman in an SUV pulling up and running her car into what appears to be the garage door. She backs up and does it again, doing further damage. Because she kept it under the speed threshold, her airbags didn’t deploy, further suggesting the ramming was considered and intentional.

At the end of the video, it appears that she’s motioning for someone to come outside, trying to make a point or possibly attempting to goad her ex into an argument.

In the comments, people went into their similar, personal scenarios, but there were some overarching points.

“Misery loves company,” one commenter said of the woman’s actions.

Another wrote, “Well, we clearly see why he got custody.”

Adding on, another commenter said, “And she just made sure that he was going to keep full custody.”

The woman’s recklessness ramming her car through the garage was particularly troubling, given anyone could’ve been on the other side of the door.

“Clearly, she didn’t think or care about the possibility that the kid could be in the garage when she went all Kool-Aid Man on them,” wrote a redditor.