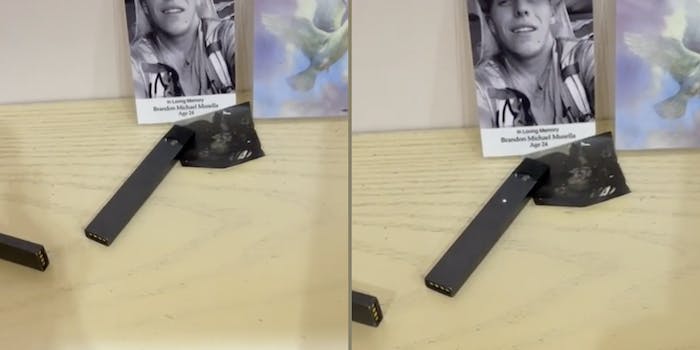 'Nah this is actually crazy.'

A recent TikTok seemingly shows a woman’s dead boyfriend’s Juul going off without anyone touching it.

The video, posted by user @195runnitup, shows her perspective as she looks at a photo of her boyfriend, his Juul, and another picture of a white dove.

“You fucking with me,” @195runnitup said as she looks the items.

A few seconds later, her boyfriend’s Juul light turns on for a few seconds before turning off again. Viewers can hear the sound of a Juul firing.

@195runnitup captioned the video, “Wow. I know you really with me, continue to watch over [and] protect us ily b.”

As of publication, the video has received over 3.8 million views and thousands of comments.

One of the most liked comments reads: “Girl he’s watching over youuuu.”

Other commenters, meanwhile, were similarly amazed by the TikTok.

“Nah this is actually crazy,” another commenter said.

“He’s letting you know he’s fine and he’s with you living life thru your eyes,” said a second person.

@195runnitup later commented on her own post that she’s a “lil scared” because she feels like her late-boyfriend is telling her “he’s stressed out idk what to think.”

Commenters, however, believe that her boyfriend was trying to watch over her in the afterlife.

“I don’t think he’s stressed. I think he’s just letting you know he’s watching over you and is always with you,” one commenter wrote. “There’s no stress in heaven, doll.”

Not everyone is convinced that the video is supernatural. Some folks pointed out that the Juul is likely malfunctioning. Vapes can occasionally auto fire, meaning it works on its own, if a piece of the device isn’t working properly.

“Mine does this all the time. It’s a glitchy juul,” another viewer insisted.

The Daily Dot has reached out to @195runnitup via TikTok comment.