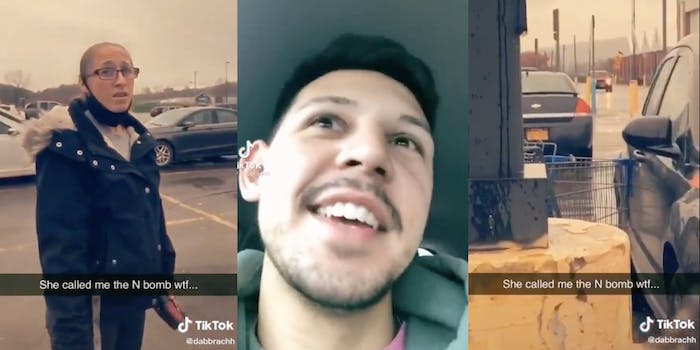 The woman reportedly claimed she received threats against her family after the video went viral.

A Walmart shopper in upstate New York allegedly hit someone else’s car with a shopping cart and then hurled the N-word at a man who called her out on it.

TikToker Michael D’Abbraccio was sitting in his car when he says a couple flew into the Walmart parking lot so quickly that they actually slammed into a shopping cart and knocked it into the vehicle in the spot next to them.

The man and woman involved are all the way to the doors when they hear D’Abbraccio’s comments, and after a short deliberation, the woman actually storms back over to his car to confront him.

When the woman finally reaches his car, D’Abbraccio has no qualms letting her know he saw what happened.

“Y’all are just crazy. You ran through here mad fast and hit this shopping cart into that other car,” he tells her.

A second video appears to pick up moments later, as the woman is calling him a “Norwich punk.”

“I’m a Norwich punk, that’s what she just said,” D’Abbraccio tells the camera. He then starts to reiterate what happened with the cart, only to have her interject with: “Maybe if you don’t talk like a fucking [N-word].”

Clearly stunned, he asks her to repeat what she said, and she does.

“I’m talking like a normal American!” D’Abbraccio shoots back as the couple finally walks away. “And this lady called me the N-word!”

He ends the video by getting out of his car to grab an image of her license plate and a better angle of where the cart hit the other vehicle.

“Norwich is amazing!” he yells.

The videos racked up views after D’Abbraccio posted them to his TikTok account, and it didn’t take long for internet sleuths to determine exactly who the woman allegedly is.

However, he eventually made footage of the altercation private after he says she started receiving threats against her family, which includes two small children.

“She apologized for what she said, said that she should have never said it,” he says in a subsequent video. “I kind of caught her at a bad day, I guess, she had said, which is understandable—everyone has those.”

However, D’Abbraccio makes it clear that he’s not “justifying what she said” and that the woman was clearly in the wrong.

“Naaaahh,” one TikTok commenter wrote. “She’s sorry she got caught. People shouldn’t target her children or family but SHE had it comin. A bad day doesn’t excuse racism. Period.”