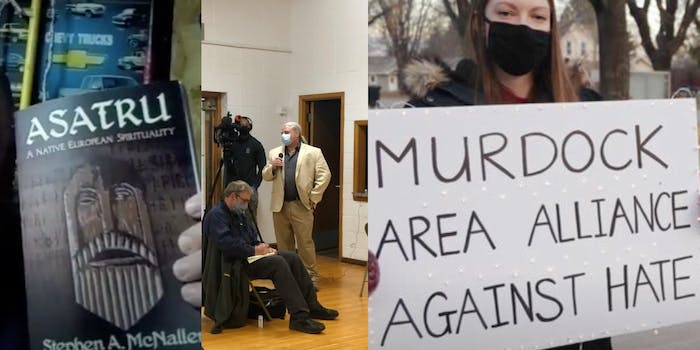 'Just because we respect our own culture, that doesn't mean we are denigrating someone else's.'

A petition to prevent an approved church opening by a “whites only” religious organization in Minnesota has collected over 120,000 signatures as of Thursday.

The Hill reports that earlier this month, the city council of Murdock, Minnesota passed a conditional permit allowing the use of a church building (previously zoned as residential) purchased by the Asatru Folk Assembly, a group recognized as a “neo-Volkisch hate group” by the Southern Poverty Law Center. According to the civil rights organization, the religious group sets “their bigotry in baseless claims of bloodlines grounding the superiority of one’s white identity.”

Its website describes the Brownsville, California-based group’s purpose as “the religion by which the Ethnic European Folk have traditionally related to the Divine and to the world around them,” where members “honor the Gods under the names given to them by our Germanic/Norse ancestors.”

Their church teaches what they curiously call a “pre-Christian” tradition.

The “church” doesn’t have a unified theology, returning to Heathenism or neo-Paganism, and the term “Ásatrú” recalls Scandinavian or Germanic ancestry and sourcing. The Völkisch movement is a known predecessor and direct influence on Nazism.

Asatru Folk Assembly rejects assertions that it is a white supremacist group.

“We’re not. It’s just simply not true,” said group spokesman Allen Turnage, told NBC, while explaining that group would not allow non-white members. “Just because we respect our own culture, that doesn’t mean we are denigrating someone else’s.”

A Change.org petition, hoping to push back on the church building’s use has received approximately 129,100 signatures as of press time.

“The group wants to create an all-white church; i shouldn’t have to explain why that’s bad,” resident and petition starter Eridan Ampora wrote in the page caption.

“I think they thought they could fly under the radar in a small town like this, but we’d like to keep the pressure on them,” resident Peter Kennedy said to NBC News. “Racism is not welcome here.”

Members of the community, including pagans against the Asatru movement, have protested. The city council and Mayor Craig Kavanaugh are adamant that the town is between a rock and a hard place, even as Murdock welcomes more Hispanics.

From a recent city-run Facebook account, they wrote directly to the Hispanic community about the 3-1 decision for approval of the church’s use: “We just want you to know that this decision was not based on the council’s personal beliefs in any way, shape, or form. This decision was solely about a zoning issue, which we felt we were bound by the law to pass and protect our first amendment rights.”

“If we would not have passed the permit, we were advised by our attorneys there would be a 99% chance we would lose in federal court and cause a substantial burden to our little town. We have been battling this decision for the past few months, and this was not easy for anyone.”