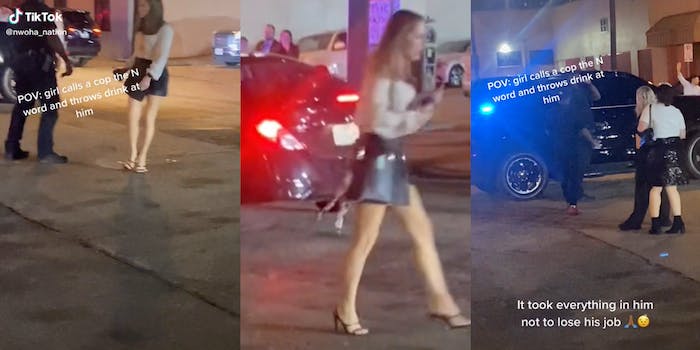 Viral footage of a white woman throwing her drink in a police officer’s face after allegedly hurling racist slurs is gaining traction on TikTok.

The clip, which is posted to user @nwoha_nation’s account, is less than 20 seconds long. It provides very little context for the surrounding situation, but claims via a text overlay that it shows a “white girl” calling a cop “the N word” and throwing a “drink at him.”

Based on the video’s hashtags, it appears to have been filmed in Dallas by @nwoha_nation, who goes by Charles Canine Nwoha on his page. A busy street can be seen in the background of the clip, while a white woman and Black officer take center stage. The two already appear to be engaged in an argument at the start of the clip, and very little audio can be made out over the surrounding noise. The visuals are clear, however, as the white woman becomes irate and throws her drink in the officer’s direction. She then turns on her heel and begins walking away, apparently utterly unconcerned with the potential repercussions.

For a moment, it appears that the officer is going to chase the white woman down, but he seems to stop himself before he reaches her. A brief fit of frustration is all he allows himself, crouching momentarily toward the ground and balling his fists, before turning his back on the woman and returning to his squad car. Several women can be seen approaching him as the white woman continues to walk away, gesturing in frustration as the clip comes to a close.

A final text overlay alleges that “it took everything in” the cop “not to lose his job” over the incident.

Commenters immediately pounced on the privilege the white woman’s actions blatantly portrayed and filled the comments section with their impressions of the clip.

Numerous people debated whether the man seen in the video was, in fact, a police officer. Several viewers claimed that his seemingly unadorned shirt and vehicle meant he could not be a legitimate officer and posed the possibility that he was some kind of security instead. Others, including Nwoha, argued against this. Nwoha claimed the woman was “banging on his squad car” before the video began and promised to provide “a full breakdown of what happened with the cop and girl” in a future video.

Viewers also argued that the blue light adorning the man’s vehicle indicated that he was a police officer. Several people claimed that security guards cannot legally use blue lights, which they used to bolster claims that he was official.

The Texas Transportation Code states that “the use of red, white, or blue beacons, or flashing or alternating lights, on a motor vehicle” is prohibited for anyone other than police. It also disallows “the use of a title or an insignia, or the wearing of a uniform, that is intended to give the impression that the person is connected with a government entity.” This would indicate that, as proposed by Nwoha, the man was, in fact, a legitimate police officer.

While numerous commenters were fixated on proving the man’s real profession, the remainder of commenters found themselves aghast at the behavior displayed in the video. They pointed out that the white woman was “banking on the white girl protection so hard” in the video, and dragged her for relying on her white privilege to protect her.

“I literally wish nothing but the worst for that woman,” one commenter wrote. This sentiment was common among viewers, many of whom expressed disappointment that the officer didn’t arrest her. Numerous people claimed her actions in the video amounted to assault and vocally hoped that she faces legal repercussions for her behavior. They also fixated on how the situation may have unfurled if the roles—or races—were reversed.

“White privilege,” one proclaimed. “He let her go that easily?”

“And she’s allowed to walk away. how (white),” another said.

Other viewers simply applauded the officer’s restraint, and noted the “courage and strength it took for this gentleman to respond to this Karen.”

A video further clarifying the events of the evening is impending, according to another upload to Nwoha’s page. Until it arrives, commenters appear primed to continue drawing their own conclusions.

The Daily Dot reached out to Nwoha via Instagram.